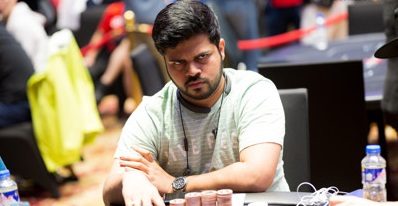 The ongoing 2019 European Poker Tour (EPT) Sochi has started gaining pace at Casino Sochi in Russia. India’s Kartik Ved bagged the 4th place at the opener EPT National and made headlines back home. Heavyweights like India’s first WSOP bracelet winner Aditya Sushant, Sriharsha Doddapaneni (pictured below in another event) were playing in the next and the highlight event, the RUB 191,800 Main Event along with other Indians.

Yesterday saw Day 2 of the ME begin. A total of 5 Indians were in the field, Sushant, Doddapaneni, Ved and Jayjit Ray but while others fell one by one and before the bubble burst, it was only Doddapaneni who shone through the day, bagging a larger stack of 214,000 at the end. He is now 37th in chip counts entering Day 3 today and also the sole Indian flag holder in the event. He has secured the minimum pay-out of RUB 364k (~INR 3.89 Lakhs) if he falls today. 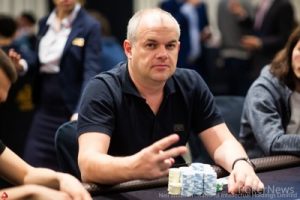 The day began with 305 players from all three previous starting flights. After tough action which lasted till 15 levels, the field whittled down to 100 players. The player to gain the chip lead was Day 1A chip leader Russia’s Aleksandr Denisov (pictured above) with 1,017,000 chips. Denisov played so well that he is the only survivor with over a million chips to play. Denisov has good chance to ship the event and if he does, he will earn the first-place cash prize of RUB 27,475,000 (~INR 2.94 Crores).

Ved was the first to bust during the day among Indians, followed by Sushant two eliminations later. Purohit and Ray also busted within two eliminations of each other, Purohit first. Doddapaneni, who won the Destiny 7.0 Europe package on Spartan, is the only Indian who will receive a pay-check in the EPT ME.

PSPC Champion and who subsequently became a PokerStars Pro Spain’s Ramon Colillas was also in the mix but busted early yesterday out of the money. The remaining 100 players will gather today at the venue to battle it out for the top prize.

Keep reading GutshotMagazine.com for today’s EPT Sochi Main Event update and for general poker news from around the world.