SSS Day 1: ‘dvaio’ is the 10th Destiny Winner on Spartan

Day 1 of the ongoing Spartan Super Series saw huge guarantee crushes and big winners of the day on TheSpartanPoker. As it was the tenth week of the Destiny series which was shipped by ‘dvaio’ for a ticket to the Destiny SnG Finale worth INR 1,00,000 and a cash prize of INR 4,30,000. Coming back to the series it’s a five day series with 25 events including The Flash, PLO HighRoller, Elite HighRoller, DareDevil, SuperStack and everyone’s favourite Main Event which is guaranteeing INR 75,00,000 with a buy-in of INR 11,000.

Apart from the series, TheSpartanPoker always gives a high value to their players and that’s the leaderboard of INR 10,00,000. The leaderboard includes INR 5,00,000 to the first place finisher. After Day 1, ‘PolarStar’ is on the top of the leaderboard with 2,786 points, following the first place it’s ‘dvaio’ in the second place and ‘sparpoker’ on third place. As mentioned above the first day of the series saw a huge turnout, let’s take a quick look at the Day 1:

The very first event of the day began at 2 pm with 613 entries on Wednesday afternoon crushing the guarantee and making it into INR 3,67,800. The prizepool was distributed to top 47 places with a min-cash of INR 2,096. The winner of the tournament was ‘PolarStar’ who is currently leading the leaderboard. ‘PolarStar’ defeated ‘Bugsbunny08’ in the heads-up battle to claim the first place prize. ‘PolarStar’ collected INR 71,684 for the first place finish while ‘Bugbunny08’ took home INR 45,534 for the second place finish.

The freezeout tournament of the day saw a participation of 189 players where the winner of the tournament saw in ‘sparpoker’ claiming it for INR 66,450. ‘sparpoker’ defeated ‘cvc’ in the heads-up battle eliminating at second place for INR 44,850. The prizepool was collected by 27 places with a min-cash of INR 3,000.

The featured tournament of the day Destiny saw 380 players taking part and battling to be the last qualifier for the fourth edition of Destiny series. The SnG Finale of the fourth edition of Destiny series will be held on 18 March at 6:30 pm. ‘dvaio’ emerged victorious in the tournament claiming the title for INR 4,30,000 and a ticket worth INR 1,00,000 to the Destiny SnG Finale tournament. ‘dvaio’ defeated ‘Minimalist’ in the heads-up battle who collected INR 3,30,000 for the second place finish.

Here is the updated leaderboard after Day 1: 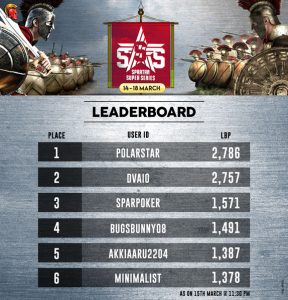