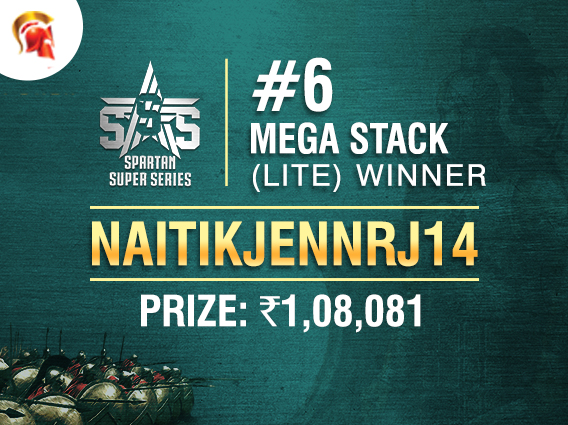 The week long Spartan Super Series completed its second day of action at The Spartan Poker and we have another five events in the bag at the culmination of Day 2. More than 3.7 Crores in cash and prizes are up for grabs for participating players so no surprise the competition is intense! Tuesday is known as Mega Stack day at Spartan and the ‘Lite’ version of this popular daily featured tournament kicked off the day’s action. Standing tall at the end of it all (yes, we’re poets at heart too), was ‘NaitikJennRj14’ who outlasted the field to take home the biggest slice of the prize money.

This INR 1,000 buy-in re-entry tournament with an INR 4 Lakhs guaranteed prizepool saw 356 entries crush the guarantee to make it INR 5,84,220. With big a field, large number of payouts were expected, 54 to be precise and all of these players were assured a min cash of INR 2,628 each.

Over the course of 7 hours, the field got whittled down to the final table and then there were three players left battling it out for the biggest chunks. ‘johnny89’ was finally shown the exit by ‘zeeke’ (6d 6c) when his 8h Ac was unable to hit anything on a board of 3c Kh Qc 4c 5s. That meant that zeeke would go up against NaitikJennRj14 for the title of this opening event on Day 2.

Despite winning that knockout pot against johnny89, zeeke was still holding a lesser stack of 3.9 million as compared to NaitikJennRj14’s 5.6 million chips. By no means was this a major disadvantage as it takes only one hand to change things around in poker. A few pots were traded back and forth before zeeke managed to score a million chip pot against his opponent to close the gap a bit more between their two stacks. NaitikJennRj14 still had a million chip advantage when the final hand took place. With the blinds running at 48,000-96,000-9,600, NaitikJennRj14 (Jh 9h) raised it to 144k and zeeke (Ts 2d) decided to test the chip leader with a heavy raise to 480,000. NaitikJennRj14 made the call to see a flop of 9s Ad Kc. zeeke continued to rep a strong hand by firing out 585k which was flatted again by NaitikJennRj14 who caught piece of the flop with his bottom pair.

Another big card in Qc on the turn but the board was now a very scary one for both players and it went check-check. Perhaps a bet here from zeeke would have closed the hand in his favour. The river card 9c gave NaitikJennRj14 a set of Nines and it was like Diwali, Eid and Christmas all coming together for him when zeeke decided to bluff at the pot by going all-in. A snap call and zeeke saw the bad news when the cards opened up. With that we had our first winner of the day in NaitikJennRj14 who won a handsome INR 1,08,080 for his first SSS title of the series while zeeke would have to console himself with runner-up prize of INR 77,993.

Stay tuned to GutshotMagazine.com as we bring you the rest of the winners from Day 2 action of the Spartan Super Series.