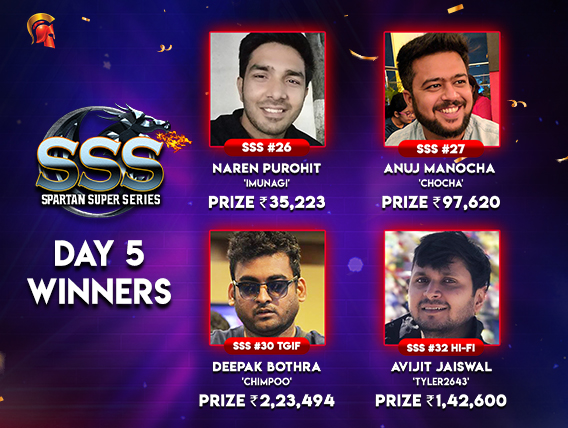 Spartan Super Series (SSS) is among the biggest online poker events held in India and once again, they returned with an INR 3+ Crore GTD event and five days have now concluded. The biggest tournament of last night was the INR 25 Lakh GTD Elite while six other tournaments were also hosted on Spartan Poker. Here’s a complete summary of SSS Day 5…

INR 550 was the buy-in to the first tournament of the day and the winner turned out to be Naren Purohit aka ‘IMUNAGI’ who shipped the tournament that attracted 303 entries, which was just more than what was required to beat the guarantee. From this field, the top 23 players received payouts. Purohit managed to end victorious, beating ‘madnutspoker’ in heads-up, the latter narrowly missing his third title of the series. Here, he had to settle for the second-place prize.

INR 2,200 was what players paid to enter the second tournament of the day and 194 entries registered to beat the guarantee and create a new prize pool of INR 3.88 Lakh. This was shared by the top 17 players. However, the player to walk away as the richest from this tournament was Anuj Manocha aka ‘chocha’ who has won before a few times on Spartan Poker. Here, he made another addition to his poker bankroll after he beat ‘Grinderrr’ in heads-up. The runner-up has also been having a fantastic series so far, with 2 titles and missing his third here, settling for second place.

You know poker is a game of skill when you see the same winners on a regular basis. Here, players paid INR 1,100 to be a part of this tournament and from the field of 342 entries, the top 31 received payouts. The winner was ‘Jai Bajarangbali’ who won a title the previous night on SSS Day 4 as well. Here, he beat Manish Lakhotia aka ‘thekid’ in heads-up to win the top prize. The final hand was a PFAI with A5 vs AQ and with both players hitting a pair of Threes of the board, Jai Bajarangbali won with higher kicker Queen.

The knockout tournament had an entry fee of INR 660 and 164 players were a part of the action, with the top 31 positions being paid a minimum of INR 1,320. ‘fookerpoker’ emerged victorious in this tournament playing on the FTRpoker platform after he struck a deal with ‘No Hope’ in heads-up, also playing from FTRpoker. The winner had a slightly bigger stack at the time of the deal. While fookerpoker is the official winner, both players will be pleased with this outcome!

This was one of the feature tournaments of the day, with TGIF being played every Friday on Spartan Poker. Here, each of the 772 entries paid the INR 1,650 buy-in and when the prizes began, the top 71 places got a share of the new prize pool of INR 11.58 Lakh. The winner was the very popular face of Deepak Bothra aka ‘chimpoo’, someone who grinds in online as well as live poker and who has got numerous big scores over the years. Here, he bagged the title after beating ‘Raven619’ in heads-up. In the final hand, Raven619 shoved pre-flop with K7 and got a call from Bothra who had A8. The board revealed two Tens and Bothra won with higher kicker, Ace.

The other feature tournament of the day was Elite, which is also played every Friday, except this one has a higher buy-in of INR 11,000. More often than not, the advertised guarantee of this tournament is passed and last night, 272 entries registered to create an inflated prize pool. It was shared by the top 23 players. ‘biglooser007’ was the eventual winner of this tournament that began at 9pm and ended at 4:40am this morning. There were several pros in content and biglooser007 was well awarded for this victory for outlasting a tough field including ‘ChipTricks’ in heads-up.

The day ended with the Hi-Fi tournament that had a buy-in of INR 2,200 and attracted a field of 408 entries. The field narrowed down and the top 36 spots were paid. By the end of the night, we had a winner in Avijit Jaiswal aka ‘tyler2643’ who took away the top prize. Since there were big prizes at stake, Jaiswal took no chances and decided to end the competition after striking a deal with ‘xerxes’ in heads-up. Jaiswal was ahead and took down the title while xerxes wasn’t too far behind, earning a decent prize as his part of the heads-up deal.

For more updates on the ongoing Spartan Super Series on Spartan Poker, stay tuned to GutshotMagazine.com.