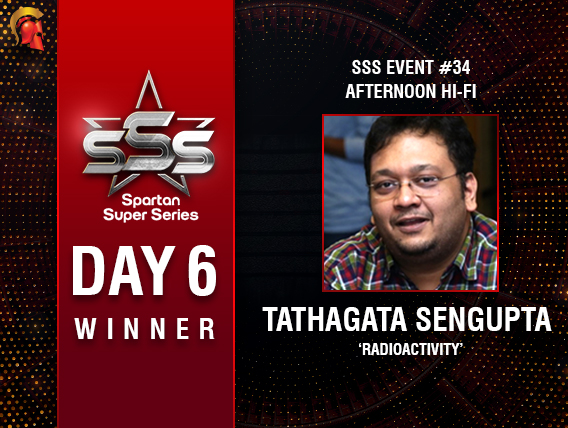 The Spartan Poker Series (SSS) is currently being hosted by Spartan Poker, one of the popular websites for online gaming in India. And yesterday saw the 6th day of this high-stakes tournament which guarantees huge winnings. The biggest tournament of the night was the Saturday’s feature, Mega Freeze. With a wide range of action slamming the week, the previous night lined with another 6 tournaments. Following is the complete summary of the day SSS Day 6…

The buy-in couldn’t get any lower than INR 110, attracting a magnificent number of 511 players. The guarantee amount exceeded to generate a higher prize pool of INR 51,100 and the biggest share was taken away by ‘nirajpow’ who bagged INR 8,666 pushing ‘Megamindd71’ in the runner-up position. The tournament came to an end after the players struck a heads-up deal and with ‘nirajpow’ carrying the largest stack of 1 million triumphed the first event.

The second tournament of the day came with a bigger guarantee of INR 5 Lakhs. A total number of 225 players joined for a buy-in of INR 2,200. The prize pool was shared among the top 20 places, with each one receiving a min-cash. However, the Afternoon Showdown title was crowned to an anonymous and online reg ‘space ace’ the winner who railed out ‘sasikiranx’ in heads-up.

In level 34 of the tournament, ‘space ace’ had 1 million chips having Kh Ah playing against ‘sasikiranx’ with 590k holding Qd Qh. Pre-flop saw the entire stack of latter in the middle and a call from the former. The board runs 3d 3c 5d 7c Kd, and ‘space ace’ gathers a higher pair in the river card and shows his two pairs of KK33 over his opponent’s QQ33.

A total number of 332 unique players were drawn to this tournament for INR 1,100 buy-in and the top 30 places received a paycheck of min-cash INR 2,490. Powering through the field was a prominent player in the online circuit Tathagata Sengupta aka ‘RadioActivity’. Ultimately, the players cut a 3-way deal and Sengupta accumulating the largest stack took the first-place prize money. He was also by ‘AIT’ in the second position and ‘psyberlyon’ in third place.

Mega Freeze is a featured tournament held on Spartan Poker for every Saturday night. The buy-in shoots up to become INR 5,500 and 113 players took their seats. However, only the top 15 places managed to finish in the money, strolling out of the tournament with a min-cash of INR 10,800. Online grinder and anonymous player ‘ONmyMAC’ took the first-place prize money after players settled for a two-way deal. ‘ONmyMAC’ carried the larger stack of 623k chips was declared the official winner.

The final tournament of the day, Hi-Fi also came with a guarantee of 6 lakhs. A total of 298 players chipped in INR 2,200 buy-in and a min-cash of INR 6,000 was shared among the top 24 places. The last tournament of the day ended with ‘adit11’ who took away the enormous prize money.

The final hand of the tournament was quite interesting, ‘adit11’ with 3h 9s up against ‘DARLINGMINION’ with 9s 2d saw both players slow playing until the river card. the board itself opened two pairs of Sevens and Sixes. Both competitors held the next best card, Nine, and ultimately settled for a heads-up deal. With ‘adit11’ carrying the larger stack of 9 million took the first-place prize money pushing away ‘DARLINGMINION’ in the runner-up position.

The SSS Millionaire comes with a huge guarantee of INR 1.5 Crore! Yesterday wrapped up Day 1B that saw another set of 337 players entering for a buy-in of INR 11,000. Well-known circuit grinder, Pulkit Goyal amassed the largest stack and claimed the day bagging 3,05,094 chips. Following Goyal’s heels is Ankit Wadhawan aka ‘Shippament’ with 2,24,289.

However, Day 1A chip leader ‘propernit’ still remains the overall chip leader with impressive 3,44,118 chips. The third starting flight will take place today, 15 December and Day 1A, 1B and 1C survivors will resume on Day 2.