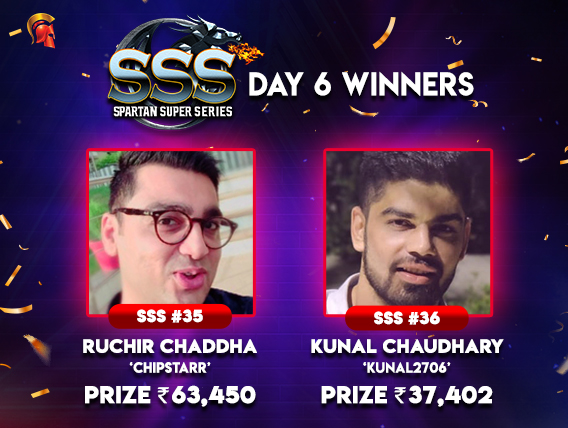 Spartan Poker Series (SSS) is currently being hosted by Spartan Poker, the most popular website for online gaming in India. And yesterday saw the 6th day of this high-stakes tournament which guarantees huge winnings. The biggest tournament of the night was the Mega Freeze scheduled every Saturday. With a wide range of action slamming the week, the previous night lined with another 6 tournaments. Following is the complete summary of the day…

The series took off with a grand number of 565 players witnessing a buy-in of INR 99. The prize pool surpassed the guaranteed amount and was distributed among the top 39 players. The tournament winner was ‘seemat’ who shipped it after defeating ‘NO MERCY’ in heads-up. seemat won with a higher two pair of QQ88 while the runner-up shoved QQ55.

The afternoon tournament crowned Vikranth Varma Anga under the name ‘borntrouble’ shipping the tournament. The event saw a buy-in of INR 2,200 and a total number of 195 players entered the tournament. A new prize pool was drawn to be shared among the top 17 players. ‘Shakerchi’ emerged as the runner-up. The tournament saw 4 participants in the final hand. Pre-flop, 3 players folded and gradually Varma stood victorious with his Kc 4d.

A total of 360 unique players were drawn to this tournament for INR 770 buy-in and the top 31 places were paid. The tournament winner Ruchir Chaddha aka ‘chipstarr’ took home the biggest prize. He defeated ‘momstacos’ in heads-up to bag the title and the cash prize. The runner-up also made a decent addition to his poker bankroll. The last hand of the tournament saw Chaddha with Ah Ac and momstacos with 9s 9c. It was interesting as the latter raised and went all-in pre-flop. While on the board was Ad 4h 5h Qc Td, and Chaddha with a set of Aces.

The fourth tournament of the day registered 228 players who entered the event with a buy-in of INR 770.  The prize pool was shared among the top 39 players for a minimum cash prize of INR 1,552. The champion Kunal Chaudhary aka ‘Kunal2706’ took home the biggest prize after beating ‘Raven619’ and placing the latter on the second position.

The Event #37 was a featured tournament for Saturday and registered 138 players. The biggest tournament buy-in was INR 5,500 and the prize pool was distributed among the top 20 poker players. Such an ambitious amount was won by ‘GHOSTF@CE’ bagging the winning amount. The winner defeated ‘Your Ugly’ while the third player ‘Samy3636’ finished in third.

Day 6 concluded with the last Hi-Fi tournament INR 5 lakhs GTD. The guarantee was surpassed, and a new prize pool of INR 6,48,000 was drawn. A total of 405 players were attracted and the top 36 places were paid. The tournament was excelled by ‘Mazacar’ who banked the top prize and defeated ‘Lord_of_the_RINGS’ in heads-up. Mazacar had a bigger stack before the final hand and eventually won by two pairs, 4422.