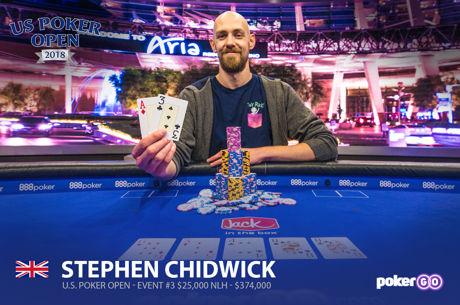 Stephen Chidwick Wins Event #3 of The US Poker Open

The inaugural US Poker Open is currently taking place, with the intention of finding the best all-round high-stakes poker player. Recently, we reported the news of Justin Bonomo and MIke Gorodinsky winning the first two events of the USPO. Today, England’s Stephen Chidwick became the champion of USPO Event #3.

Chidwick is England’s second most profitable poker professional, only behind Sam Trickett. He participated in Event #3 of the 2018 USPO, that was a $25,000 NLHE event. Yesterday, poker pros Keith Tilston and Daniel Negreanu were in the lead coming in to the final six of the event, but neither of them went on to become the champion.

Stephen Chidwick had the fourth largest stack among the final six, but he played well to beat his five opponents, and secure the top prize of $374,000 (~INR 2.4 crore) for first place. Remember, the goal is to take home the trophy by grossing the most money over the span of 8 events. Having finished in the final table in the first event too, Chidwick is currently in first place of total money earned in the 2018 USPO. Tilston is in 2nd place.

With this win, Chidwick’s career live poker earnings have neared $10.5 million and he will be looking to increase that number with 5 events still to be played in this tournament series. “I’m feeling really good right now. I would love to win the trophy, even though it might be awkward to pack,” said Chidwick after this win.

Tilston and Negreanu maintained their dominance until the game reached 3-handed play. Here, it was Chidwick who held the chip lead and he did brilliantly against these seasoned opponents, eliminating Tilston in heads up after a total of 156 hands were played on the final table.

Keep watching GutshotMagazine.com for continuous updates on the 2018 US Poker Open!