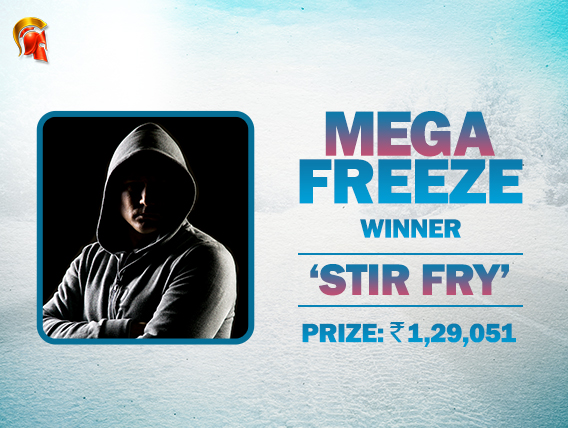 Regular players on The Spartan Poker will know that a special freezeout tournament known as Mega Freeze is held every Monday at 7:30pm IST. In this format, there’s no coming back once you bust your chip stack and some players really love this format of the game.

The Mega Freeze has a buy-in of INR 5,500 and an INR 5 lakh guaranteed prize pool, but that prize pool was taken up to INR 5.8 lakh last night, with a total of 116 entries registering to the tournament. This also allowed the top 17 players to be paid out a minimum cash prize of INR 9,106.

It has been a good last few days in online poker for female player Nisha Sareen, who plays under the name ‘Nisha123’. Just on Friday night, she shipped Spartan’s inaugural Triple Bubble tournament, which was one of their three new tournament offerings, for which she was awarded nearly two lakh rupees.

She seems to be on a hot run, also having made it to heads-up of yesterday’s Mega Freeze tournament, but she wasn’t able to get past her heads-up opponent, ‘STIR FRY’. The player held the lead and was further putting pressure on Nisha, whose chip stack was diminishing.

Today’s featured tournament on Spartan is the INR 10 lakh Mega Stack tournament and you can get all updates on that tournament here on GutshotMagazine.com.