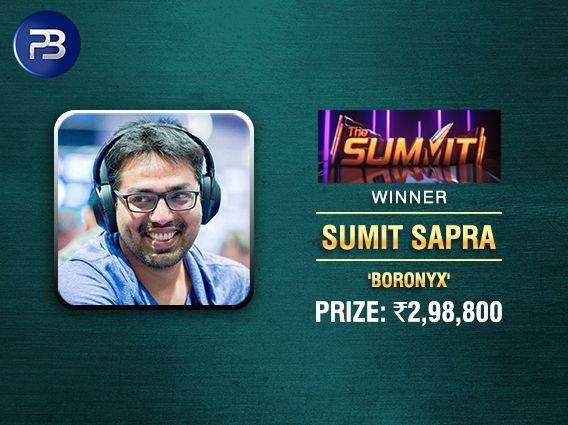 Most of the top poker companies have a couple of tournaments that are their most popular ones on their respective platforms. For PokerBaazi, one of these signature tournaments would be the INR 10 lakh GTD Summit MonsterStack Turbo tournament, which is contested every Thursday night at 8pm.

The tournament clashes directly with Adda52’s Godfather tournament, which was won by Aditya Sushant last night. However, it didn’t stop there from being a high participation on PokerBaazi, with a total of 166 entries (92 players + 74 re-entries) taking part in the INR 8,250 buy-in tournament. This broke the guarantee, with a new prize pool of INR 12.45 lakh being generated.

Yesterday’s Summit tournament lasted 6 hours and 16 minutes before a winner was declared in the early hours of today morning. Outlasting this field and shipping the tournament was popular poker pro Sumit Sapra aka ‘boronyx’, who took home the biggest share of this prize pool, adding INR 2,98,800 to his poker bankroll.

For Sapra, winning a poker tournament isn’t something new, having plenty of poker achievements over the last year and more, both live and online. He recently won a Mega Freeze title on The Spartan Poker, while also making a deep run in the APL Vietnam High Roller in June.

In this tournament on PokerBaazi, Sapra moved through a tough field and a tougher final table, to take home this top prize. His heads-up opponent was Abhishek Jaiswal aka ‘abhishek081190’, who made a brilliant run himself but couldn’t get past Sapra. He settled for the runners-up prize of INR 2,17,875.

Gutshot caught up with Sapra after this big win. He said, “At one stage, I was 4/4 but still managed to ship it from there, so I’m happy with the way I played and ran during the final stages of the tournament. The new interface of PokerBaazi is pretty slick and I had fun playing this tournament.”

Keep reading GutshotMagazine.com for more updates on the top poker tournaments from around the country.