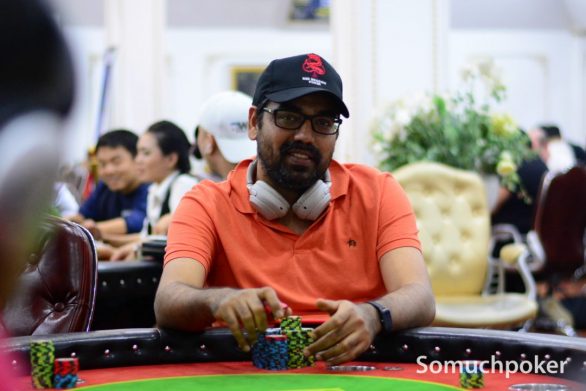 Vietnam is arguably the most happening place for poker in Asia right now. This year itself, APT Kickoff Vietnam happened and the Main Event was won by an Indian pro, Abhinav Iyer. The 2019 World Poker Tour DeepStacks (WPTDS) Vietnam has also begun on 14th March and will end on 24th.

The VND 25 million Main Event in the series already wrapped up all its starting flights and will play Day 2 today. The Indian contingent has made an impressive mark in the series till now and the Main Event also saw some Indians progressing from Day 1A and 1B. Now it’s time to report what happened on Day 1C yesterday.

Sumit Sapra, one of India’s top talents especially when it comes to live felts, topped the chip counts, bagging 310,500 chips at the end of the day. The second in chip counts, Vincent Chauve is a little far with 263k chips. Shashank Jain was the second highest chip stack among Indians to progress from Day 1C, at 5th overall on Day 1C with 232k chips. Sahil Mahboobani (148.5k chips) has also fared well on the Day. Other Indians to qualify from the day include Deep Raina (45.5k) and Dishant Soni (41k chips).

Sapra is now 4th in overall chip counts and will join 6 from Day 1A and 4 Indians from Day 1B. Day 1B chip leader Thai Ha is still the overall leader with 363.5k chips. Sapra even finished runner-up in the ongoing SSS series SHR event for INR 11.16 Lakhs. He has shown his poker prowess in past live events and is a perfect candidate to win the Main Event this time, if any.

Day 2, with its 170 players, will begin today and top 86 places will be paid from the fat prize pool. Keep reading GutshotMagazine.com for more such tournament updates and other poker news from around the world.