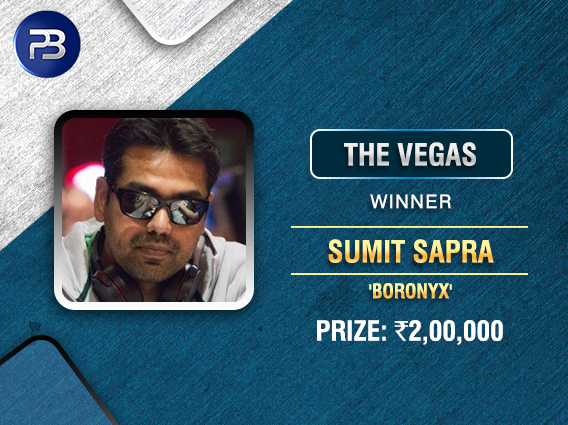 Here’s someone Gutshot Magazine has got used to writing about every once in a while. Whether it’s live or online poker, we’re sure this guy’s name will pop up sooner rather than later. We’re talking about none other than Sumit Sapra, who despite being busy with a packed live schedule in Vietnam, found a way to ship an online poker tournament too.

Sapra plays under the name ‘boronyx’ on PokerBaazi and if you play regularly on their platform, you’re bound to see this username pop up in the money, or on the final table or even winning titles, as he did last night. This latest win saw him shipping The Vegas INR 10 lakh GTD last night.

The Vegas is played every Wednesday night on PokerBaazi at 8pm and a couple of weeks back, the guaranteed prize pool of this tournament was bumped up from INR 6 lakh to INR 10 lakh. Last night, a total of 326 entries (187 players + 139 re-entries) joined the INR 3,300 buy-in tournament.

Sumit Sapra came out on top of this field, winning the tournament and adding to his numerous poker achievements. He made an addition of INR 2,00,000 to his poker bankroll, having beaten ‘Woolala’ in heads-up, who also got a handsome prize of INR 1,47,500 for finishing second.

The tournament was over by 2:16am this morning and Gutshot immediately caught up with Sapra to congratulate him and ask him what he feels winning yet another online poker title. He said, “Thanks. It’s nice to ship this tournament as it’s one of the events I hadn’t won on PokerBaazi yet. It’s a nice warm up for the upcoming PPL series! It’s great to see they have introduced some new tourneys every week with bigger guarantees.”

So, while Sapra keeps winning bigger across all major platforms, you can get updates on all these top tournaments only on GutshotMagazine.com.