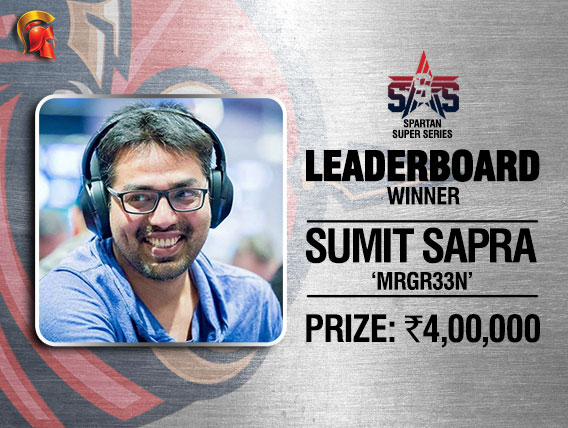 Over the last seven days, many players walked away with titles and enormous prize money at the Spartan Super Series (SSS) on The Spartan Poker. Yesterday was the final day of the series which was scheduled between 10-16 September, with INR 4+ crore given away in guaranteed prizes.

While many players won big individual prizes, including Arjanveer Chadha winning The Elite High Roller, Pulkit Goyal winning the PLO High Roller and Phanindra Akkina winning the SSS Main Event, there were some players who were extremely consistent throughout the week.

These players had additional motivation of INR 10 lakh that would be given away on the SSS Leaderboard, including INR 4 lakh for the leaderboard topper. Now that the series has ended, the standings are final and the player who ended up victorious was none other than Sumit Sapra aka ‘mrgr33n’, who had the lead for the last few days and he closed it out well on the final day too.

A majority of his points towards the leaderboard came when he won SSS Event #8 on the second day of the series and then followed it up by shipping SSS Event #13 the very next day. He overtook ‘M@neyM@ker for the top spot and from there, he finished in the money on several occasions, including a few final tables.

Already having plenty of achievements in online and live poker, Sapra can add an SSS Leaderboard victory to his poker resume, taking home the top prize of INR 4 lakh. Finishing in second was Vinay Choudhry aka ‘Dhanraj Seth’ who also had a brilliant series, winning three titles out of the scheduled 37; he won INR 2 lakh for second place.

Gutshot caught up with Sapra to congratulate him after this great week in online poker. He said, “Thanks. The overall series was really good as I made deep runs and final tables every day, winning a few events along the way. To be honest, when the series started, I didn’t think I would be playing the full schedule due to some other prior commitments but when I realized I was topping the Leaderboard after the first two days, I got motivated to try and play more events than what I originally planned. On the penultimate day, I actually made two 2nd place finishes while playing from my phone!”

When asked about the SSS series overall, he said, “The SSS schedule offers a wide spectrum of events in terms of buy-ins and formats and with the addition of the lite version of the featured events every day, there’s a lot of value for tourney grinders even in the side events. The schedule is pretty demanding though and takes a lot out of you physically and mentally. The other great aspect is that the points you score in the featured and lite events count towards the monthly Hot and Cool leaderboards and that’s an added incentive on top of the SSS Leaderboard. The Spartan Poker is one of the most popular platforms in India for online poker tournaments and they offer good structures and a clean interface along with tremendous value through their promotions.” 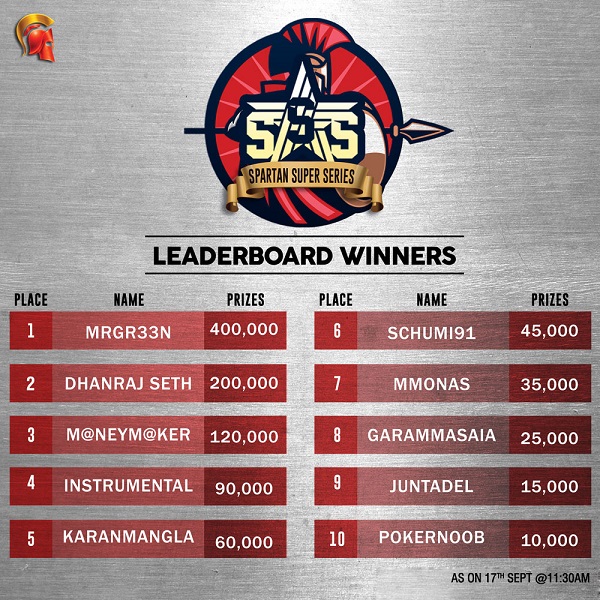 Keep reading GutshotMagazine.com for more updates on the biggest and best poker tournaments across the country.