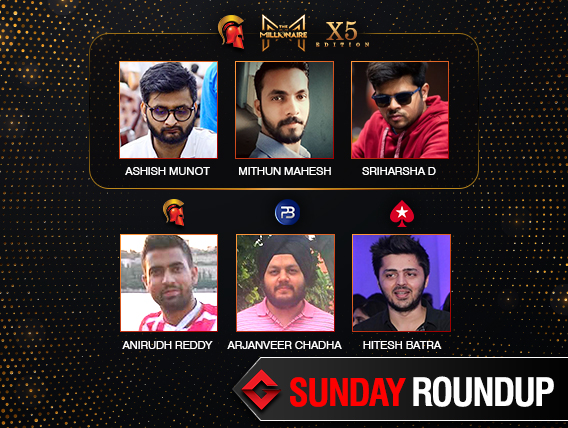 And what an astonishing night it was across the online felts on Sunday! All the major poker sites of the country are gearing up with tremendous action and set to pave way for the new year! Spartan Poker is well known for its varying tournaments and yesterday night Millionaire X5 crowned its ultimate champion. PokerBaazi and PokerStars brought in the best offers and prominent faces of the country strolled out with big packages. And here is a complete summary of Sunday majors…

Spartan Poker hosted the final edition of Millionaire X5, marking an end to 2019 with the biggest tournament guarantee of an incredible INR 10 Lakhs to the top 5 players! Yesterday at 6 pm sharp, Day 1C kicked off and eventually, it was ‘Ronaldinho18’ amassing the largest stack of 2,55,687. However, it was Arsh Grover aka ‘BigggTymeR’, the overall chip leader from Day 1A to lead the remaining players towards the showdown after building up an impressive 4 million stacks.

Dominating a field of over 1,800+ entries was the 2019 WPT India Main Event winner Ashish Munot aka ‘Donkey 07’ who topped the list followed by a leading online grinder Mithun Mahesh, ‘piscean’ in the third position, ‘Zenos’ in 4th place and another prominent face in live and online felts Srisharsha D aka ‘Fish2050’ claiming the Millionaire X5 crown after the players settled for 5-way deal.

Sunday SuperStack INR 40 Lakhs GTD was also hosted on Spartan Poker at 8 pm sharp. A total number of 688 players entered for a buy-in of INR 5,500. The competition continued for over 9 hours and before that the top 63 places received a paycheck with a min-cash of INR 17,400. It was online crusher Anirudh Reddy aka ‘flash’ who triumphed the Sunday night after defeating Raghav Bansal aka ‘thatssosick’ in heads-up.

Sunday on PokerStars was all about Sunday Special INR 15 Lakhs GTD, a bounty tournament which kicks off at 5 pm sharp. Each player chipped in INR 5,500 buy-in to enter the competition and eventually after long intense hours of grinding, the star of the night was online reg Hitesh Batra aka ‘hiteshbhai999’ who shipped the tournament for INR 1.54 Lakhs defeating Anuj Yadav aka ‘brockLesnar95’ in heads-up. Eventually, Yadav managed to walk out with INR 1.13 Lakhs.