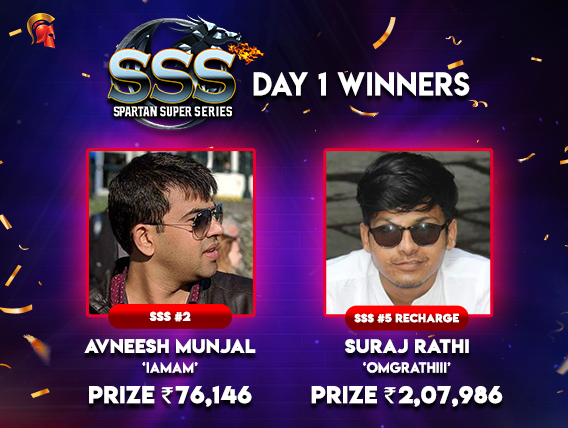 Spartan Poker is hosting yet another live tournament for all poker fanatics in the country. September has already witnessed tons of live as well as online series so far. The rage doesn’t end here. With the return of SSS, abundant with action, the series will surely attract great number participants.

The high-stakes SSS is live in action for a 7-day series and yesterday saw the conclusion of Day 1 (Event #1- #6) with an enormous series guarantee. The long-week series has 44 exciting events lined up for all players.

The series began on a modest note with an INR 80K GTD. A total of 172 players signed up for the tournament, all chipping in the INR 220 buy-in amount. The tournament was hosted with the top 31 places being paid. Player ‘Rounder87’ emerged victorious after he beat ‘sry’ in heads-up to bag this title. Rounder87 played well and won with Straight, 7-3 in the final hand.

The afternoon event began saw a buy-in of INR 2,200 with a decent number of 75 participants registering. The prize pool was shared among the top 15 remaining players with a minimum cash of INR 6,300. The afternoon showdown saw the rise of Avneesh Munjal under the name ‘IamAM’ winning the competition and adding another title to his collection. ‘Lord_of_the_RINGS’ was titled the runner-up for the event and the players ended the competition with a deal.

The tournament had a buy-in of INR 880 attracting a decent number of 150 players. The top 27 players received a paycheck and the tournament saw the win of ‘Greyhound15’. His heads-up opponent ‘pokerdivine’ managed to finish second and settled for the runner-up cash prize.

‘Drifter2’ emerged as a winner of title tournament and bagged the top prize along with the SSS #4 title. He beat a field of 148 players. The event saw a buy-in of INR 660 and the prize pool was shared among 27 top players. Drifter2 beat ‘radhya’ in heads-up after the players ended the tournament with a deal.

The Event #5 was a featured tournament for Monday and saw a massive entry of 636 players (re-entries 127, rebuys 215). The tournament buy-in was INR 2,200 and the guarantee was passed, eventually distributed among the top 63 poker players. Such an ambitious amount was won by Suraj Rathi aka ‘OmgRATHIII’. He defeated ‘HO9EY’, the latter receiving the title of runner-up.

The tournament was the last one hosted for the day. For a buy-in INR 1,100, a total of 543 entries (including 83 re-entries and 207 re-buys) were attracted. The overwhelming field for the tournament also reflected on the prize pool of INR 5,43,300 to be shared among 45 places. Eventually, the final tournament’s winner was ‘Grinderrr’ after beating ‘ONmyMAC’ in heads-up. ONmyMAC folded on the flop of the final hand and the players called for a deal.