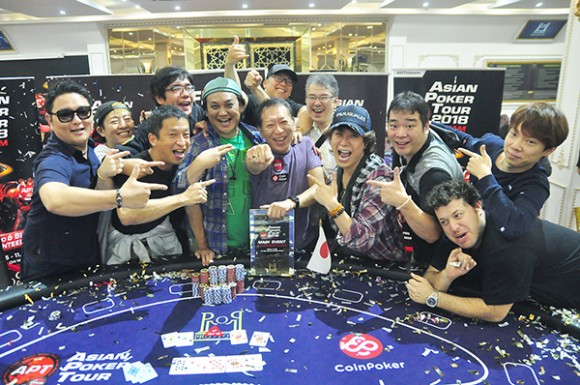 The Asian Poker Tour (APT) recently had a stop at Ho Chi Minh, Vietnam, where a number of tournaments were scheduled between 5-11 October. Yesterday was the final day of the series at the Pro Poker Club, with the Main Event as well as a couple of side events taking place.

The ultimate champion turned out to be Japan’s Tetsuya Tsuchikawa, who took away the massive top prize of VND 1,638,200,000 (~INR 51.6 lakh) for shipping the tournament. He has been playing in the APT for a number of years and has earned several side event titles including the 2017 APT POY title, but this became his first major APT victory.

Tsuchikawa now has over $900k in live poker cashes, and that’s quite a big amount for someone who has played majority of their poker in Asia. This also turned out to be Tsuchikawa’s second highest live cash after the $153,901 he won in 2014 for winning the WPT National Main Event in Paranaque City, Philippines. He also won the CoinPoker Last Man Standing promotion and finished third in the APT Player of the Series race here in Vietnam.

The pay jumps were huge as the final seven players came out to play on the last day of the APT Vietnam series yesterday. Earlier, India’s Nikita Luther ended her stellar run when she busted her stack shortly before the close of Day 3, finishing in 11th place for a prize of VND 135,160,000 (~INR 4,30,600).

“For six years, I came runner-up three times but never won until now. I always just win side events so my friends call me ‘Mr. Side Event’. I’ve won at other poker events, at WPT and PokerStars twice but from APT, I’d never win,” said the Japanese player after his maiden APT major title.