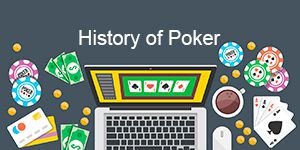 The Birth of Online Poker

While most of us were busy ushering in the New Year with various kinds of celebrations all around the world, we forgot that the 1st of January is an important date for the game of poker as well. 1st January 2018 marked the 20th anniversary of the birth of online poker, from where quite a few players have cashed out millions of dollars over the last couple of decades.

There was once a man named Randy Blumer, who had an engineering degree and whose work was building ships for the Canadian Navy. However, this man, whose passion was poker, later turned out to be the one credited for the birth of online poker. Today, the online poker industry is a multi-million dollar one, thanks to Blumer.

He developed an online poker website in 1997 called Planet Poker which was initially launched with play money but the site was later launched on 1st January 1998 as the first real money poker website. So let’s take some time out of our busy schedules and wish online poker a happy 20th birthday. Since Planet Poker, there have been thousands of poker websites that have come and gone, while some sustained and managed to become online poker giants.

A year later, in 1999, a group of Canadians launched Paradise Poker which gave strong competition to Planet Poker with both the websites constantly improving their software and other aspects of the game to stay ahead of each other. However, they both enjoyed the top spot for quite a few years, until future biggies like partypoker and PokerStars started settling down in the industry. Partypoker was a website launched in 2001 and one which remained the largest online card-room until 2006.

The poker boom began around 2003 and since then, it was PokerStars and Full Tilt Poker who started flourishing in the online poker industry, eventually leaving partypoker behind. In India too online poker has been steadily growing over the past 5-6 years being largely driven by the younger demographic of players. Adda52 was the pioneer in India’s online industry followed by PokerBaazi and The Spartan Poker which form the so-called ‘Big Three’ of our domestic online poker industry.

As the years passed, that first site Planet Poker slowly wasn’t able to keep up with the competition and eventually shut shop in 2017. The website is still active, but not as a gaming website and just as a site explaining poker rules.

The future of the online poker and gaming industry looks very bright and we expect many more positive changes to roll in over the next few years. You can follow GutshotMagazine.com for all the big news and latest developments in the gaming industry!