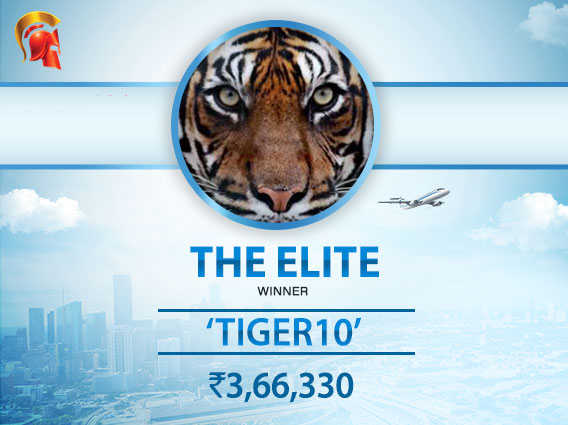 Without doubt one of the top value tournaments that players look forward to competing in over the weekend is the Elite at The Spartan Poker. Featuring a buy-in of INR 11,000, this Friday evening feature offers a monster 18 Lakhs guaranteed prizepool for its participants. Given the amount of value on offer, it was not surprising that last night’s Elite saw a 4-way chop among the remaining players.

Taking away the biggest chunk of the prizepool and the title was ‘Tiger10’ who has been having a pretty good few months on Spartan. Aside from last night’s win, Tiger10 also took down the ninth edition of the Destiny series which got him a 1 Lakh worth entry into the Destiny Finale SnG coming on Sunday evening. This Final SnG will see him competing with nine other players for a chance to head to Europe for a prestigious poker festival on a prize package worth 10 Lakhs!

Coming to the Elite, 108 players ponied up the buy-in which meant that 15 players would make it to the money. Min-cash was INR 32,400 which while not bad is certainly not what the players have their eye on. Regs like Pulkit ‘Championplayer’ Goyal (12th) and Anirban ‘pokernoob’ Das made the money but were unable to get to the final table. Other regs and past winners who gave Tiger10 company up top included runner-up Sagar Choudhury a.k.a ‘Strangeplay’ (INR 2,81,783), Sumit ‘mrgr33n’ Sapra (3rd for INR 2,57,990) and another Destiny winner in ‘Exhaust’ who finished in 4th place for INR 2,46,795.

These four players did play a fair while before they decided to make the chop. Three of the four had an average stack of around 400k and with 1.1 million chips, it was obvious that Tiger10 would get the biggest share of the chop via ICM. He took home a handsome prize of INR 3,66,330 for the win. The last elimination was Saboteur_all (Kd Th) who was severely shortstacked and moved all-in getting a call from mrgr33n’s (4s Ad). The board Qh 6c 2c 9s 8h proved to be unkind to the underdog and he was out in 5th place for INR 1,35,900.

Stay tuned to GutshotMagazine.com for lots more from the world of poker!