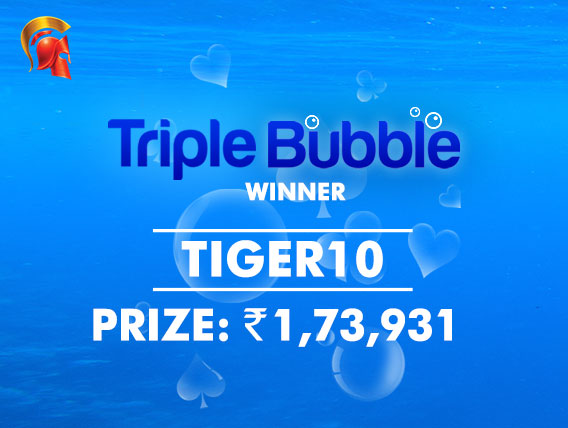 Less than a couple of weeks back, The Spartan Poker launched three new tournament offerings for their loyal poker players and one of those tournaments is the Triple Bubble tournament, where there are not one or two, but three prize bubbles. It is also one of Spartan’s featured tournaments, with a guaranteed prize pool of INR 9 lakh.

Earlier today, we reported news of Goonjan Mall taking home a prize in excess of INR 4 lakh rupees for shipping The Elite on Spartan. The Triple Bubble began at 9pm IST last night, a little while after The Elite kicked off. It went on for 6 hours and 44 minutes before we had a winner in ‘Tiger10’.

The player beat a field of 252 entries to emerge as the winner and he was handsomely rewarded for it, taking home a prize of INR 1,73,930. The tournament ended in Level #46 when ‘d00mtr00p3r’ was knocked out and the final two players agreed on a heads-up deal, not too different in chip stacks.

It has been over a decade since the popular American sitcom called FRIENDS was taken off air, but there still seem to be a lot of hardcore fans going around. ‘omgrachelgreen’ shipped The Elite last Friday and this time, it was ‘Joey Tribbiani’ who reached heads-up against Tiger10.

d00mtr00p3r shoved all-in pre-flop with Kh As, and Joey Tribbiani was quick to make the call with pocket Sevens while Tiger10 made the smart decision of folding his hand. 6h 2h 8s 4c 5h opened on the board and that gave Joey Tribbiani the pot with a straight, eliminating d00mtr00p3r in third place. Joey Tribbiani earned INR 1,59,969 for second place, with fewer chips at the time of making the deal.

The specialty of the Triple Bubble tournament is that it awards the money bubble player with the buy-in of the tournament, which saw ‘foldkardukya’ getting back his investment of INR 3,300. The FT bubble player ‘HomelessOnWiFi’ received a Millionaire ticket for tomorrow while ‘Joey Tribbiani’ won tickets to both the Millionaire and next month’s 2oK.