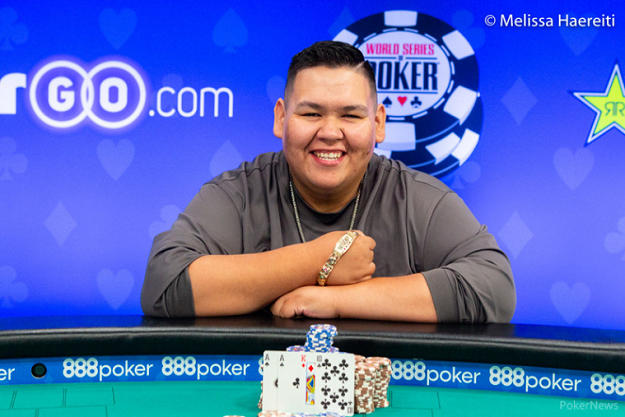 Things didn’t go as expected earlier today for Indian origin poker player Srinivas Balasubramaniam. He ended Day 2 of Event #11: $365 PLO GIANT with a handsome chip lead over the final 9 survivors, but he had a horrendous start to Day 3. He started the day by losing a big pot to Kevin Nomberto, and then doubling James Sievers and Michael Mizrachi too.

Eventually, he became the first to bust his stack, and while he finished an impressive 9th for $10,250, he would’ve been disappointed as he had the chance to win his first gold bracelet. On the other hand, there was young Tim Andrew, a poker player from Canada, who reached late to the final table because he had overslept.

He had a cautious approach on the final table, playing against good players, including 4-time bracelet winner Michael Mizrachi. It was Andrew’s first entry into a WSOP event and boy, did he make it count! He took advantage of the decent stack he had at the start of the day to beat the competition, win his first gold bracelet and take home his first 6-figure score.

“I woke up at 1:45pm and I was gonna leave right then but then I was just like ‘you know what, I’m gonna miss some hands anyways.’ So, I just wanted to have a shower to at least feel good. I had a cold shower to clear my head,” he said about reaching late on the final day, but also added, “It’s a pretty good feeling,” when asked about securing the bracelet.

Other Indians to cash out in the event:

Keep reading GutshotMagazine.com for a daily report of what’s happening at the 2018 World Series of Poker.