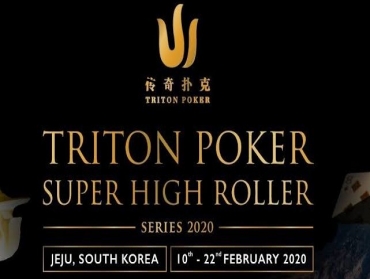 The Asian region had a fabulous start to the new year hosting several incredible series within a month’s time. And once again, charge yourself and hop onboard to conquer the 2020 edition of Triton Poker Super High Roller Series. One of the high-stakes tournaments in the world returning to Landing Casino in Jeju in South Korea, marking the first stop of the popular series. The cards and chips will be in the air from 10 to 22 February 2020, comprising of twelve high-stakes events involving high-stakes poker players around the world.

When Triton Poker Series first landed a flag in the Jeju Province in 2018 there were five events on the calendar. The return in 2019 saw the number increase by two but this year 2020, promises more value for the players by placing 12 events. The series will kick off with 3 NLH tournaments including a Turbo format for a buy-in ranging from 250k to 750k.

In 2018, the ME buy-in was HKD 2 million and it was Mikita Badziakouski becoming the first player to win back-to-back Triton Poker SHR Series NLHE Main Event after conquering a field of 55 entries to bag HKD 41,250,000 as first prize. Last year, it was Timothy Adams to take down Triton Jeju 2019 Main Event earning HKD 27,760,500. One the other hand, Kenneth Kee took down the 60 entries HKD 1 million Triton SHR Series SD Main Event for HKD 22,500,000. However, the overall series will come to an end with HKD 300k Short Deck Ante – Turbo.

Gutshot caught up with Danny Tang having over $8.4 million in total live earnings, Hong Kong’s number one who stated, “Triton is easily the best in the industry right now. Settling the bar higher and higher, their tournaments, service and production is second to none. Paul and Richard have done an unbelievable job and its always a pleasure to participate in a Triton event.” So far, Tang has 3 cashes at Triton poker tournament including worth an impressive over $2 million.

Truly, 2020 came with good news as for the first time in Triton’s history, the season is putting down the Player of the Year (PoY) award. The journey to crown the first PoY champ starts from 10 February and the players will accumulate their points in a total of 4 stops, Montenegro (4-18 May), London (29 July to 13 August) and so on. The ultimate champion is assured HKD 2 million in prize money! Keep reading GutshotMagazine.com for complete coverage of the Triton SHR Series as well as for general poker news from around the world.