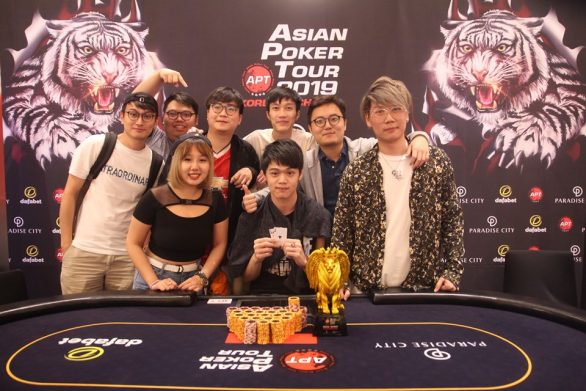 There was so much attention on the APPT Manila series taking place that we failed to realize there are many other major poker tournament series also taking place across the world. One of them is the Asian Poker Tour (APT) Korea Incheon 2019 which is scheduled between 2-13 August at the famous Paradise City.

As you may already know, most APT events have a string of side events that are part of the schedule, but the main attractions are always two tournaments – APT Main Event and APT Championships Event. The first of these recently came to an end as Hong Kong’s Tsang Dicky Siu Hang went on to ship the APT Korea Main Event.

The last three months have been fantastic for this player as he bagged two APT titles in May/June in Seoul and then also got his previous best cash of NTD 227,040 (~$7,229) for winning the opening event at AJPC Taiwan. Here however, his prize was much bigger as he smashed through 236 Main Event entrants to win KRW 59,485,000 (~$49,300) in prize money along with the Golden Lion Trophy and an APT Championship Ring.

The bubble burst on Day 3 and the final 8 players returned on Day 4 to complete proceedings and announce a winner. He beat Japan’s Haruta Koichi in heads-up, but it was after a deal which saw the latter getting an almost equal prize of KRW 52 million as the two were nearly equal in stacks at the time of the deal.

The APT Korea series goes on with the Championships Event also kicking off yesterday. For all major updates from this series, stay tuned to GutshotMagazine.com.