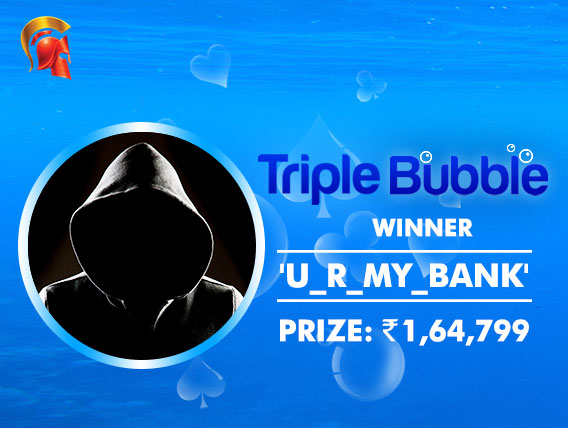 Featured tournaments take place daily on The Spartan Poker, but Fridays are one of the best days on their platform, with a couple of big tournaments being hosted. One such tournament is The Elite, which was shipped by ‘biglooser007’ last night, while another Friday night tournament is the unique Triple Bubble.

The Triple Bubble INR 9 Lakh GTD kicked off at 9pm IST last night and the INR 3,300 buy-in tournament came to an end 5 hours and 50 minutes later. It had a participation of 321 entries, which saw the guarantee being beaten and a new prize pool of INR 9.63 lakh being created.

Ultimately, the top 27 places were paid out a minimum cash prize of INR 9,630 and the biggest prize of all went to ‘U_R_MY_BANK’, who was paid out INR 1,64,799 for finishing first. It was a brilliant performance by him to ship the tournament, having beaten Varun Gulati aka ‘vg007’ in heads-up.

Gulati took home the runners-up prize of INR 1,38,081. While U_R_MY_BANK was unavailable to comment, Gutshot caught up with Gulati to ask him about this good run on Spartan last night. He said, “Spartan has the best structures and the best guarantee MTTs among the Indian sites, so I enjoy playing there.”

The tournament came to an end when a 4-way deal was made on the final table in Level #40, with the blinds at 6,300/12,600 – 1,260. ‘MohanKapoor’ finished third for INR 1,29,565, while ‘adrrrrrrrr’ finished fourth in the tournament for INR 1,04,714. The specialty of this tournament is the multiple prize bubbles and some players got rewarded more than they would in usual tournaments.