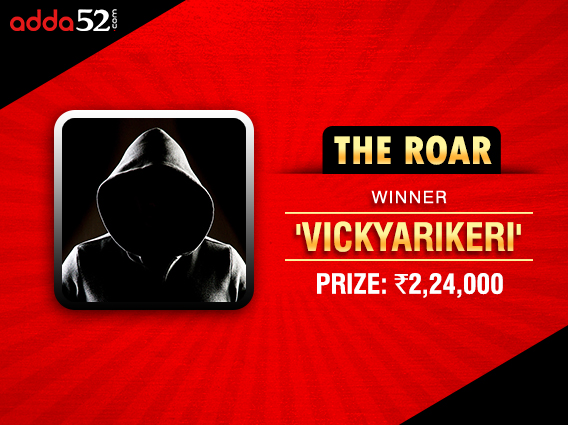 Mondays can be extremely depressing with people in India coming out of their weekends and starting a new week of work. However, poker players have a lot to look forward to on Mondays, with several high-guarantee tournaments being hosted across the various online platforms.

The Roar INR 7 lakh GTD is one such tournament which is hosted every Monday on Adda52. As usual, it kicked off last night at 8pm and it was well past midnight before it came to an end. A total of 132 entries (83 players + 49 re-entries) joined the tournament last night by the end of the registration period.

It was always going to be a tough field to beat on one of India’s best online poker platforms, and at the end of last night’s tournament, it was ‘Vickyarikeri’ who emerged victorious and took away the biggest prize of the night. He was awarded INR 2,24,000 for his efforts in this tournament.

It was a packed final table so Vickyarikeri would’ve been very proud of his achievement in a tournament where only the top 9 players were paid out, with a minimum cash of INR 17,500. Finishing second was Mihir Thakkar aka ‘gameofdeath’ who also won a handsome prize of INR 1,36,500. In third place was Akshay Nasa aka ‘vibaks’ who won INR 98,500 after also finishing second in the WSOP Europe Mega Satty on PokerBaazi (won by Dhawal Lachhwani).

Gutshot caught up with Thakkar who made a deep run to finish second in the tournament. He said, “It’s always good when you ITM in tournaments especially when you finish 2nd. It motivates you to ship future tournaments. The Roar on Adda52 was a good learning experience. At one stage, I got tilted and made a wrong call and lost a huge stack. Was down to 8 BB, but I bounced back, so for me patience is a basic requirement for shipping a tournament, as you need to grind for 5 to 8 hours. One mistake or wrong play and all your efforts wash away.”

Thakkar has previously shipped The Roar on Adda52 and was so close to doing so again. He was also a runner-up in the Adda52 Big Millions 2, while also being the only player to make final tables in both Big Millions 1 and Big Millions 2. Keep reading GutshotMagazine.com for more updates on the top poker tournaments in India.

Don’t have an account on Adda52 yet? You can join their platform and be one of the big winners of the Adda52 featured tournaments, or any of their other top tournaments. To do so, sign-up HERE.