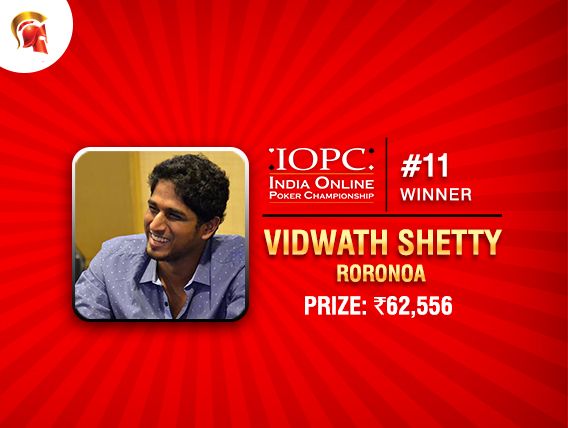 It was just yesterday that we reported news of popular poker player Vidwath Shetty winning Event #10 of this edition of the India Online Poker Championship. He woke up the next morning and was back to work, winning IOPC Event #11 INR 2 Lac GTD (550 RE), which was the first tournament of Day 3 of the series.

The event kicked off at 12pm IST and Shetty, who plays under the name ‘RoronoA’, claimed his second title of this prestigious online poker series hosted by The Spartan Poker. The INR 550 buy-in tournament’s guarantee was crushed, creating a prize pool of INR 3.12 lakh, where the top 39 players were paid out a minimum cash prize of INR 2,153.

Shetty outlasted this field of 624 entries to win back-to-back titles at the IOPC, and he was awarded INR 62,556 for finishing first. He became the first player in the series to win two titles and this gained him vital points towards the IOPC Leaderboard, where INR 30+ lakh is up for grabs, including a Jeep Compass and a Bajaj Dominar!

Shetty faced ‘Rakhi21’ in heads-up of the tournament, against who he had a chip lead of over 2:1. Rakhi21 went all-in before seeing the flop, holding 7-8. Shetty held Q-A and he made the call. The board opened 9-3-J-J-2 and both players didn’t improvise, giving both a pair of Jacks from the board and Shetty taking down the pot and the title, with a higher kicker – Ace.

Rakhi21 wouldn’t be too disappointed with this result as a small buy-in turned into a big prize of INR 41,589 for second place. Today, quite a few IOPC tournaments will be taking place and Shetty will be looking to gain some more points towards the IOPC leaderboard. Keep reading GutshotMagazine.com for all updates from this popular tournament series.