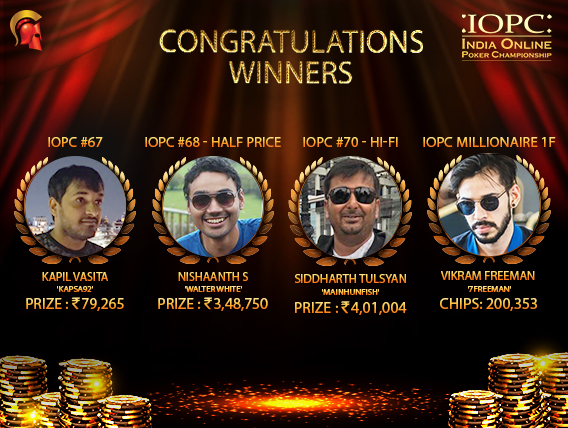 The competition is heating up at Spartan Poker as we inch closer to Day 2 of the prestigious IOPC Millionaire, which boasts a guarantee never seen before on Spartan. Yesterday was Day 14 of the ongoing India Online Poker Championship (IOPC) and apart from the sixth starting flight of Millionaire, other side events also declared their winners during the day. Keep reading for a complete roundup of IOPC Day 14…

INR 550 was the buy-in attached to this first tournament of the day and it was another healthy participation of 519 entries that drove the prize pool past INR 2.59 Lakh. 31 players shared the prize pool, but the biggest prize went to ‘brahmos999’ who took down the tournament after beating Puneet Dhawan aka ‘GroSpeLLier’ in heads-up. This was brahmos999’s second title of the series and here, he added INR 54,884 to his poker bankroll while Dhawan had to settle for the runner-up prize of INR 36,952 after his set of Eights was beaten by a K-high flush in the final hand.

You had to pay INR 770 to play in this re-entry tournament and if you participated, you were a part of a field of 581 entries which was just enough to beat the guarantee here. Again, we had a winner who took away his second title of the series as Kapil Vasita aka ‘kapsa92’ shipped the tournament and became richer by INR 79,265. In heads-up, he got past ‘No Hope’ who won INR 50,349 for finishing second. Facing a chip deficit of slightly more than 1:2, No Hope shoved on the flop with a pair of Fives and Vasita called with a pair of Nines which stood its ground to give the latter his second IOPC title!

This was one of the featured tournaments of the day with a buy-in of INR 5,500 and a 50% discount available on all re-buys in the tournament. The top 23 players were paid a minimum of INR 17,400 but the biggest prize of the night went to Nishaanth Shanmughasundaram aka ‘Walter White’, someone who has won a few titles on the Spartan/FTR platform in the past as well. Here, he beat the field including popular pro Nishant Sharma in heads-up, adding INR 3,48,750 to his poker bankroll. As for Sharma, he managed the runner-up prize of INR 2,36,250 after finishing second in the battle of the same names. also missing his second title after winning IOPC Destiny last week.

PLO isn’t the most popular format of poker in India, but the game is spreading slowly within the community and there are frequent tournaments held for the high rollers as well. Everyone who participated in this tournament paid INR 33,000 and by the end of the registration period, we had 108 entries in all, which was enough to pass the advertised guarantee. Eventually, only 11 players were paid a min-cash of INR 81,000 but the player to win the biggest prize of all was ‘mantvik’ who was rewarded with INR 8,91,000 after beating a number of known pros including Eka Vedantham aka ‘gettingthere’ in heads-up, the latter winning INR 6,33,420. In third place was another well-known pro Siddarth Singhvi aka ‘PeterPunter’ who won INR 4.14 Lakh.

Hi-Fi has been a regular feature all throughout the IOPC but this time, it had a massive INR 6,600 buy-in which has not been seen before for this tournament. Yet, the guarantee was passed with 316 entries registering and eventually, the top 29 places were paid with a min-cash of INR 16,684. Nishaanth Shanmughasundaram was in action once again, this time finishing as runner-up for a prize of INR 2,69,990. We had a brilliant day in poker but here, he was denied his second title by Siddharth Tulsyan aka ‘mainhunfish’ who managed to win the title and strengthen his bankroll by INR 4,01,004.

It was the sixth starting flight of the prestigious IOPC Millionaire tournament and the participation on the day was massive, with 416 entries participating and each of these entries paying INR 11,000 to be a part of the tournament. From them, only 73 managed to find a bag and progress to Day 2, joining those who already progressed through Day 1A-1E before this. Leading the chip counts is Vikram Freeman aka ‘7freeman’ who managed a stack of 200,353 chips in the 4 hours of scheduled play between 6-10pm last evening.

For more updates on the top online and live poker tournaments in India, stay tuned to GutshotMagazine.com.