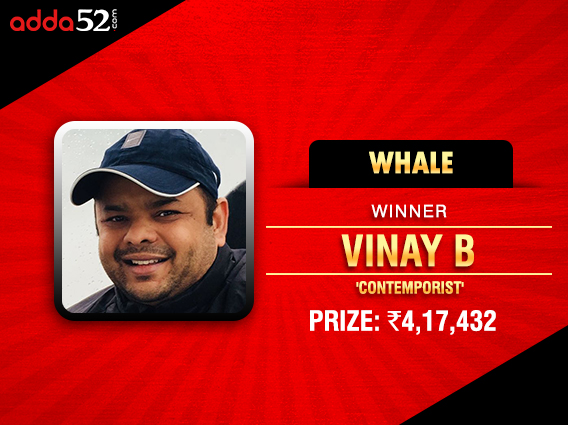 Vinay B takes down Whale on Adda52

There’s never an off day for some Indian poker players, as they always seem to be winning. One such player is Vinay B, who has a long list of poker achievements, both in the live as well as online circuit. Yesterday too, he took down a major tournament on Adda52, where he plays under the name ‘ContemporisT’.

Whale 6-Max INR 15 Lakh GTD is Adda52’s Friday night featured tournament that kicked off yesterday at its scheduled time of 8pm. Once again, a field of India’s best pros participated but barely a few of them managed to finish among the 24 paid places, who each received a minimum of INR 12,926.

With a buy-in of INR 7,500, a total of 222 entries joined by the end of the registration period, which was enough to pass the guarantee by a bit. Adda52 regulars who finished in the money last night include Goonjan Mall aka ‘gmtesting’ (14th), Ram Kakkar aka ‘mowgumotu’ (12th), and Sriharsha Doddapaneni aka ‘Ivey2’ (10th).

For someone as accomplished as Vinay B, this would’ve been a fairly simple Final Table, as there were not a lot of pros in the mix. He had his ups and downs earlier in the tournament, but managed to get through and eventually, he took away a massive cash prize of INR 4,17,432 for topping the field. In heads-up, he beat ‘dhruvmittal1’ who gained INR 2,43,312 for finishing second.

Gutshot caught up with Vinay after this win and he said, “6 max tourneys are my favourite, as they’re more intense and there’s more action. Whale is one such tourney where the best of the best take part and to be able to beat that field is an achievement in itself. I was at risk of being bubbled in this event but managed to scrape though ITM and with a couple of double-ups, I got back in the game.”

The tournament lasted for nearly 8 hours, eventually ending at 3:45am this morning, thanks to a good battle between the final two. Vinay added, “Heads-up was interesting as it went on for a while against an aggro player. However, we finally closed the event. It was a very satisfying win. Cheers!”