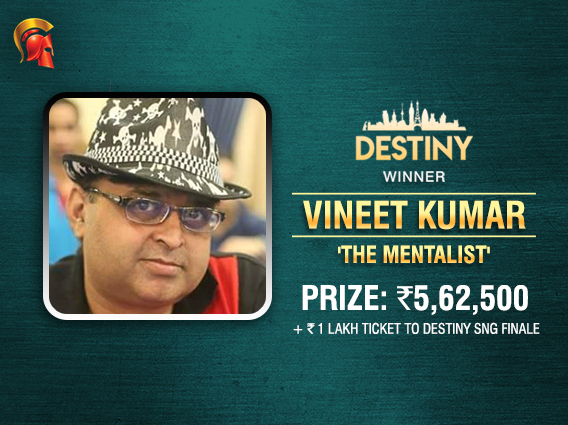 The extremely popular Destiny tournament took place on The Spartan Poker last night, one of their signature tournaments which takes place every Wednesday. Last night was another Destiny tournament, where Vineet Kumar aka ‘The Mentalist’ came out on top of the field to book his spot in the Destiny SnG Finale.

Destiny 6.0 offers an INR 10 lakh GTD package trip to Europe to the winner of this Finale and Kumar became the seventh person to enter the Finale, with three Destiny winners still to be decided. In yesterday’s Destiny INR 25 Lakh GTD tournament, a total of 493 entries registered to the INR 5,500 tournament, where the top 40 places eventually shared a minimum of INR 15,000 in prize money.

We spoke to Vineet just a few weeks back when he won Spartan’s Cool Leaderboard tournament and the top prize of INR 1.7 lakh.  He told us there are bigger wins to come and he proved himself last night, shipping Destiny for INR 5,62,500 in prize money plus an INR 1 lakh ticket to the Destiny SnG Finale.

He heads-up, he got past Sahil Mahboobani aka ‘ImHighIshove’, who took home the runner-up prize of INR 4,12,500, which isn’t too bad either. Mahboobani is also a known pro in the circuit with several wins in the live as well as online circuit. Yesterday’s grind was an extremely long one for these two as the tournament came to an end at 6am after ten and a half hours.

Gutshot had a work with Kumar regarding the tournament victory. He said, “It was a tough tournament, as Destiny always is and yesterday was an extremely hard final table too. I was down to just 5 Big Blinds when we entered 3-way play which went on for around 45 minutes. However, I managed to make a comeback and eliminate the second in chip lead and then enter heads-up with a lead. Heads-up went on for around 2 hours and I got very short stacked there as well but returned and eventually Sahil (ImHighIshove) made a call thinking I was bluffing, so I managed to take down the title.”

Talking about the Destiny 6.0 Finale, he said, “The last time we spoke, I mentioned that there will be bigger victories coming and here we are, with a Destiny victory and the chance to win the Finale to travel to Europe as well. I played in Europe last year and will be looking forward to shipping the SnG as well. The field so far doesn’t seem to have a lot of tough players except maybe ‘pokernoob’ (Anirban Das) so my chances are good right now. Hoping for the best.”