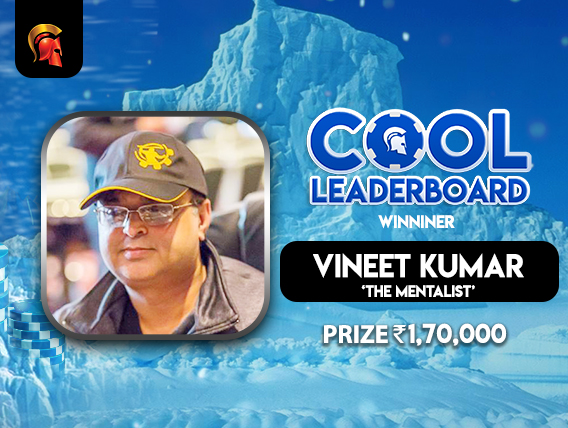 The Spartan Poker is known for their multiple tournaments and promotions, giving all types of poker players the chance to win every month. One of their monthly promotions is the Cool Leaderboard, where players playing in the mini versions of Spartan’s featured tournaments are eligible and the top performers finish on the top of the leaderboard.

August has just come to an end, and with that, the Hot and Cool Leaderboards have also come to an end on Spartan. Being consistent throughout the month and finishing with 3,155 points on the Cool Leaderboard, which gave him the top spot and the top prize of INR 1.7 lakh was none other than Vineet Kumar aka ‘The Mentalist’.

Now this is a popular figure in the Indian poker community, earlier playing under the name ‘DR. No’, using which he won a lot in online poker in the past. However, DR. No is now dead and reborn as The Mentalist, and Kumar waited for the ideal time before revealing this identity to the poker community.

Gutshot caught up with the winner of August’s Cool Leaderboard on Spartan. We asked him about the journey through the competition. He said, “I actually didn’t participate in the leaderboard until 10th August, when I shipped a tournament. Then, I realized that I had never won a leaderboard on any of the websites in the past, so I decided to go for it and it was tough competition right till the final day. I was using the formula to calculate leaderboard points, to know which players could overtake me on the final day. I had to finish in the money on the last day, because if I didn’t, there was a chance that ‘spectre’ (Bhanu Prakash) or ‘Tiger10’ would win the leaderboard. I now look forward to September’s Hot and Cool Leaderboards as well.”

We also asked him about his opinion on Spartan and their promotions, to which he said, “The Spartan Poker is undoubtedly the best. There are many players who complain about bad beats and stuff, but eventually, they all come back to Spartan. It is the best, with great tournaments and promotions and great prizes and structures. I started my journey with Spartan four years ago online, and with IPC in live tournaments. Spartan has improved in all ways, including their customer support, always being able to get someone even on phone.”

Kumar has reached several final tables under the name ‘The Mentalist’ and we’re sure this isn’t the last we’ll hear of him. Keep reading GutshotMagazine.com for more updates on major poker tournaments and promotions in the country.