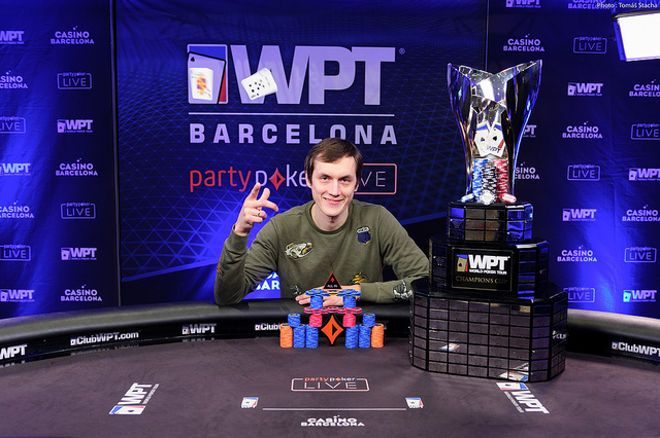 The European city of Barcelona saw one of its highlight poker events conclude, 2019 WPT Barcelona. The series ended yesterday. India’s Abhishek Goindi finished 2nd in Event 6 – PLO for a handsome cash prize there, along with two other Indians who made the FT.

The BIGGEST event of the series was the WPT Barcelona €3,300 Main Event. The tournament drew 1,227 total entries and the player to emerge victorious, bagging €600k (~INR 4.69 Crores) and a $15k seat to Baccarat Crystal WPT Tournament of Champions was Vitalijs Zavorotnijs of Latvia.

Zavorotnijs has more than $1 million in live cashes till now. He won the Kings of Tallinn €1,100 ME this February for a good €85.3k, which was his biggest live cash that time. Now, he bested the cash and by what margin! He reacted saying, “I haven’t changed how I have played this year, but I do feel more mentally prepared. I know I can play well, but I also know you cannot win without luck, and I’ve had luck.”

The event smashed its €3 million guarantee and brought the prize pool to a staggering €3,570,570. This was the second largest WPT ME prize pool of the current season. The Final Table was played on fifth and final day of the tournament. Six souls, all from different countries, competed on the day.

Zavorotnijs entered heads-up with 3.5:1 chip lead against Bulgaria’s Boris Kolev. In the final hand, he was holding King-nine suited and had a gut-shot and a flush draw on the turn against Kolev’s top pair with Ace-queen. They put their entire stack in the pot and saw the river reveal itself. Zavorotnijs completed his flush on the river and eliminated Kolev at 2nd place (€375k).

Zavorotnijs is the first WPT Main Event Champion from Latvia in the tour’s entire history. He said, “How I feel right now is hard to describe. A mix of emotion and exhaustion. I’m really tired and really happy! When you work hard for something, and it happens, to be in this spot right now, it feels like a dream come true.”

Keep reading GutshotMagazine.com for more such tournament updates from all parts of the world as well as for general poker news.