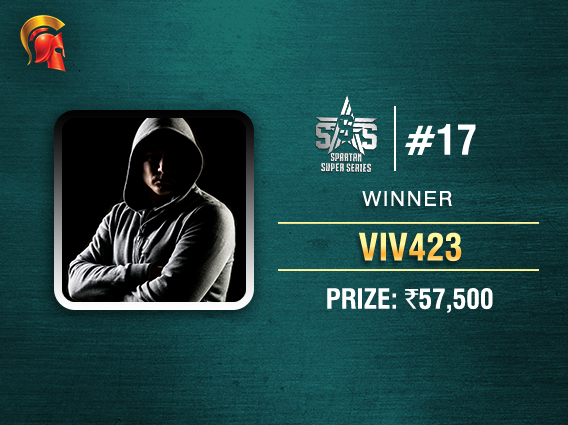 The Spartan Super Series (SSS) kicked off on 8th October on The Spartan Poker and we’re more than halfway through this cash-rich series now, with Day 4 coming to an end last night. Or we should probably say today morning, as the grind in a couple of the tournaments went on way past midnight.

SSS Event #17 INR 2.5 Lakh GTD was the second tournament to kick off yesterday on Spartan, with a buy-in of INR 660 and an INR 2.5 lakh GTD prize pool. The 294 entries that registered to the tournament slightly missed the guarantee and the total places paid were 24, with a minimum cash of INR 2,500 – nearly four times the initial investment.

In this hand, Jannat52 made a pre-flop raise of 20k with pocket Fours and viv423 made the call with 6c 8s. The 8d 2d 9s flop immediately put viv423 ahead as Jannat 52 shoved all-in and the former called. The fourth and fifth street cards opened 5s and Kd respectively as viv423 won with a pair of Eights over his opponent’s pair of Fours.

This hand meant all the chips in play went to viv423 and he took away the top prize of INR 57,500 for winning this tournament, while his opponent Jannat52 won the runner-up prize of INR 38,625. Both players wished to stay anonymous, but both will be looking for more good runs to get themselves on the SSS Leaderboard, where INR 10 lakh will be given away to the top performers of the series.