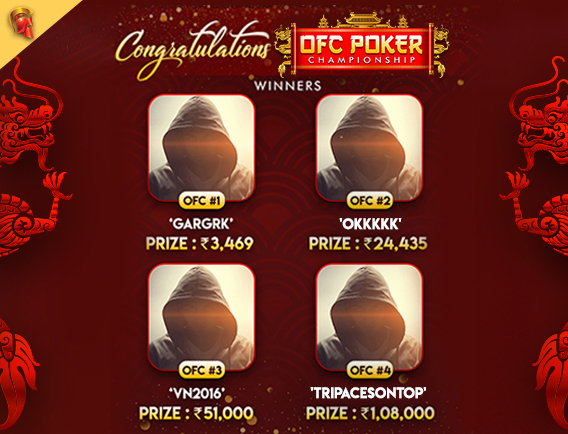 While poker has gained a lot of traction in the country in the past decade, other variants of this sport are also gaining in popularity. While Omaha is the next game after Texas Hold’em many players move to explore, in the past few years, the variant known as OFC or Open Face Chinese poker has also taken off in a big way. This past Sunday, it was all about OFC at Spartan Poker as the popular platform hosted a day-long OFC Championship series which featured a total of 4 tournament events.

Featuring a series guarantee of 6 Lakhs, the OFC championship kicked off at noon and would go on till 9pm at SpartanPoker.com. The buy-ins and guarantees would progressively increase with each event. Also a very attractive proposition for players was the Leaderboard prize of INR 50,000 to be distributed among the top 5 point scorers of this day-long series.

Being the first event of the day, the buy-in of INR 55 was tiny and tasty enough to attract any OFC enthusiasts who would want to give this interesting poker variant a try. 115 entries took part in the opening event and it finally was down to ‘gargrk’ and ‘TymTravel’ for the title. It was gargrk who eventually took down the title and the first place prize of INR 3,469.

This 3:00 pm tournament attracted 100 entries who ponied up a buy-in of 550. The eventual prizepool crossed 90k and 20 players would make it to the money in this second event. it was ‘Okkkkk’ who claimed the title in this tournament over his headsup opponent ‘xafeno’. For his winning efforst, Okkkkk got a nice payday of INR 24,435.

The evening kicked off with this INR 1,100 buy-in tournament which got a total of 79 entries and that meant that the top 8 players would make the money. ‘vn2016’ was the best of the field outlasting everyone including his headsup opponent ‘Mayaksh’ to take away the biggest slice of the prizepool i.e. INR 51,000.

You save the biggest for the last and so it was with this INR 3,300 buy-in final event of the series. Not only was this the prizepool of INR 3,00,000 that the players were competing for but it was also the last chance to earn valuable leaderboard points to score some additional cash too. The winner from the 66-enty field was ‘tripacesontop’ who took the biggest chunk of INR 1,08,000 defeating his headsup opponent ‘Karan1515’.

While it was a good day for the event winners, even those who did not score a title were rewarded for their consistency. While ‘Mayaksh’ feel tantalisingly short of a title win in Event #3, he did perform well enough across the entire series to earn himself the top spot on the OFC series leaderboard. For his runner-up effort and cashing out in three of the four tournaments, Mayaksh took the lion’s share of the 50k leaderboard prizepool i.e. 15,000. The rest of the leaderboard winners were tripacesontop (INR 12,500), vn2016 (INR 10,000), Mantri (INR 7,500) and Okkkkk (INR 5,000). 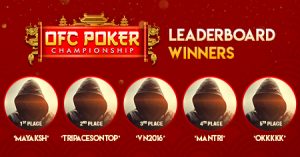 An interesting idea by Spartan Poker to test out a tournament series for the OFC format. We think this will only pick up as this variant of the game gains more followers. For all this and more keep locked on to GutshotMagazine.com