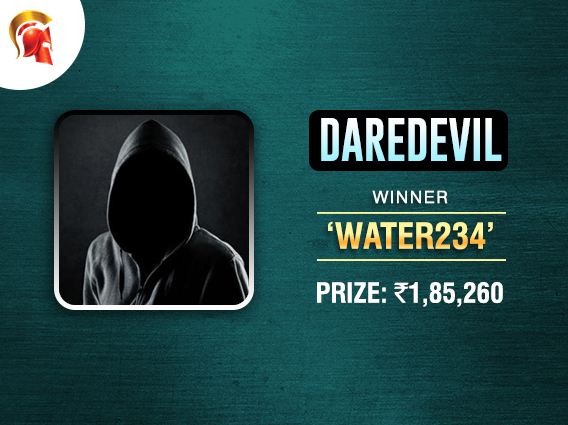 All the action this week is going down at The Spartan Poker with the Little Big Series taking place on the site. Besides this low buy-in high value series, Spartan continues to host its regular schedule of featured tournaments and one of them was last night’s DareDevil which was won by ‘Water234’.

What makes the DareDevil a bit different from the regular tournaments is that players who bust in the early levels are allowed to re-enter but at 50% of the original buy-in of INR 4,400. Given that value proposition on offer, 78 players descended upon the virtual felts at Spartan to take their shot at being crowned this week’s DareDevil. The prizepool swelled up to INR 6,28,000 which went past the 6 Lakhs guarantee in place for this tournament. The top nine finishers would make the money with a minimum payday assured of INR 20,410. The first of those payout positions was claimed by online reg Akshay Nasa a.k.a. ‘sherlock52’. Another reg in Anant ‘Pro’ Purohit also finished a few places above Nasa winning INR 50,240 for his 5th place effort. Even the top three had known names with second runner position going to Rajat ‘Garammasala’ Sharma winning INR 87,920.

Sharma’s elimination meant that Water234 would go up against Pranav Khandalkar a.k.a. ‘pranavpoker’ for the title and biggest prize. pranavpoker was at a 2.5:1 chip disadvantage when heads-up began but he kept taking stabs at pots to try and bridge the gap between their stacks. In the end though the difference was difficult to surpass and after a heads-up, we were down to the final hand of the tournament. pranavpoker (Jc Tc) hit his pair of Jacks on the flop but the river eventually gave Water234 (5c 8c) two pair on a board of Js 4c 8s 7d 5s.
His win in the tournament enabled Water234 to get top prize of INR 1,85,260 while pranavpoker once again showed his consistency with a deep money finish taking home INR 1,17,750 for second place.

Stay connected to GutshotMagazine.com for more stories from the live and virtual felts from across the world.