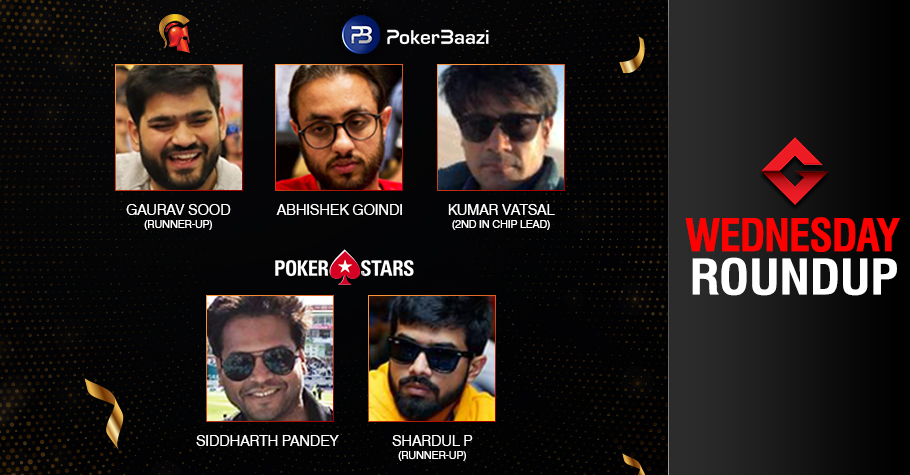 In today’s Roundup, we will take you through the major tournaments that took place last night across the leading online poker platforms in the country. Wednesday was yet another busy day in the lives of poker players. We are also fast approaching the weekend and one can notice bigger guarantees and prizes that means intense competition! So, lets take a quick tour of yesterday to unveil the champions!

Spartan Poker’s Wednesday popular Destiny INR 30 Lakh GTD kicked off at 8 pm last night. The buy-in to the event was INR 5,500 which clocked in 754 entries, successfully collecting a prize pool of INR 37.70 Lakh. The top 60 players finished ITM. Adding the ultimate prize money to his poker wallet was ‘space ace’ who also booked a seat to SnG Finale. Eventually, Gaurav Sood aka ‘mozzie17’ had to settle in the runner-up position.

INR 3,300 buy-in tournament Mega Freeze INR 4 Lakh GTD enrolled 159 entries on Spartan Poker. Once again, generating a bigger prize pool of INR 4.77 Lakh, the top 23 finishers earned a min-cash. Coming out on top was ‘d@enareys’ who rode past the field to clinch to the winner’s title after defeating ‘kush1986’ in heads-up. Kartik Ved aka ‘TheInternetKid’ followed next.

PokerBaazi’s Game Changer 3rd Edition is right here promising INR 2 Crore GTD. The popular tourney will be running between 1 July to 5 July comprising of 4 starting flights. For a buy-in of INR 5,500, the event registered a massive field of 1,030 entries. Within a few hours, the field whittled down to 114 players progressing to Day 2 on 5th July at 6 pm. Topping the list was Jayant Makkar aka ‘loserfish19’ with a stack of 4.34L , the chip leader of Day 1A was followed by Kumar Vatsal aka ‘23offsuits’, Ankit Kapoor aka ‘helter_skelter’ in second with 3.93L and third position bagging 3.86L.

PokerStars India’s Wednesday flagship event Night on Stars INR 8 Lakh GTD fetched 315 entries for INR 2,750 buy-in. It took over 7 hours for the ultimate champion to ship the event and take home INR 1.30 Lakh in first-place cash prize. The competition ended with a heads-up deal that saw ‘MH1024’ coming out on top while his opponent Shardul Parthasarathi aka ‘merci999’ also secured INR 1.30 Lakh for his efforts. Once again, Kartik Ved aka ‘TheInternetKid’ finished in the third place (read above).

Another attraction on PokerStars India last night was Big Bubble Rush INR 5 Lakh GTD. A total of 204 runners joined the field hunting for the prize money and it was online reg Siddharth Pandey aka ‘siddonuts’ who rode past the field to clinch to the top prize of INR 48,089 after outlasting Pranay Chawla aka ‘aankdikhatahai’ in heads-up. The winner of AOPS Table for 6 settled in the second place for INR 35,445.