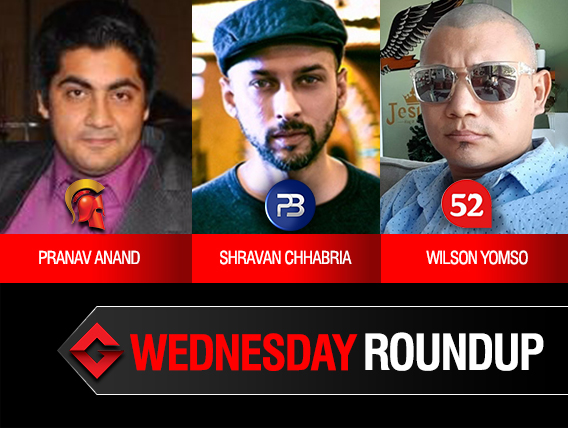 While Indians have been representing the country quite well in WPT Cambodia, the online felts did not run dry, pulling out the best players on Wednesday night. The day came with huge guarantees and each of the top finishers walked out with massive prize money. And here is a quick summary of Wednesday night…

Now every active player knows that Spartan Poker comes up with a series of 10 tournaments named Destiny. Each finalist reserves a seat to SnG Destiny Finale and the ultimate winner is awarded the Las Vegas Package! Yesterday Destiny 12.0 INR 25 Lakhs GTD saw another finale occupant, a known online grinder Pranav Anand playing under ‘mithrandir16’ who emerged victoriously after beating ‘piscean’ in heads-up.

For a buy-in of INR 5,500, a massive field entered the tournament watching the guarantee being smashed to create a prize pool of INR 29.5 Lakhs. The notables who were paid out include Jayjit Ray aka ‘David Blaine’ (3rd), Rajat Mahajan aka ‘BloatedBelly’ (4th), Guneet Kwatra aka ‘guntz’ (7th), Neeraj Kumar ‘SelfClaimedPros’ (10th), Raman Gujral aka ‘tathagat’ (13th), Aditya Sushant aka ‘SuperuSer’ (21st), Neel Joshi aka ‘Worm33’ (26th), Nadeem Basha aka ‘blindgame’ (49th) and so on.

PokerBaazi hosted G.O.A INR 20 Lakhs GTD yesterday at 8 pm sharp, witnessing a modest field as each entry chipped in INR 5,500 buy-in. After 8 hours of intense grinding, the winner was announced. Shravan Chhabria, a well-known leading player of India both in live as well as online felts beat ‘Benny_gur’ in heads-up to ship the entire tournament. Chhabria pocketed a valuable amount of INR 3.7 Lakhs adding another victory in his poker career.

Wednesday nights are reserved for Maverick INR 10 Lakh GTD on Adda52. Several hopefuls took to their seats for a buy-in of INR 2,500. Powering through the field was a regular face across various online platforms, Wilson Yomso aka ‘Kaling’. Yomso won INR 2,48,000 for defeating ‘supernuts’ in heads-up who settled for the runner-up position of INR 1,50,000.

As usual, the prize pool was shared among the top finishers including Rishi Mundhra aka ‘ronaldo94’ (4th), Tuesday night Hitman winner Tarun Goyal aka ‘aggtarun’ (5th), Dhaval Heda aka ‘dhavhe’ (11th) and others.

The chip graph on PokerStars Night on Stars INR 5 Lakhs GTD clearly shows the winner, ‘The Annihilator’ who remained above the average chip stack in the last 3 hours of the competition. Maintaining this tough position, the anonymous player took home a big amount of INR 98,261 prize money after firing two bullets. The champion of the night beat ‘Poker_Basilisk’ in heads-up who added INR 72,437 to his bankroll.

9 stacks hosted StackUp INR 2.5 Lakhs GTD at 7:59 pm sharp, outlasting the field was an anonymous player ‘p@ker_king’ who shipped the tournament for INR 67,500. The field was good enough to reach the guaranteed amount as each entry paid INR 1,650 buy-in.

The top finishers who received a share from the prize pool include Amar Mehta aka ‘fishetarian’ (3rd), Raj Kumar Gahlot aka ‘Fireman’ (7th), Vishal Madan aka ‘GTOcrusher’ (11th) and so on. For latest updates on live and online poker tournaments keep reading GutshotMagazine.com and stay tuned!