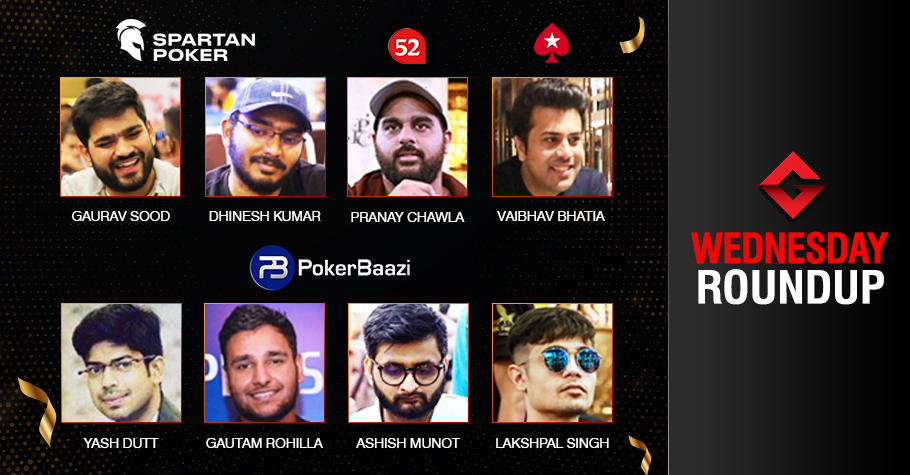 It was an eventful Wednesday with two domestic series dominating the action, namely, PokerBaazi Premier League (PPL) and Adda52 Online Poker Series (AOPS). However, Spartan Poker’s Wednesday popular Destiny was also one of the biggest guaranteed events. And here’s a recap of all action.

The INR 30 Lakhs GTD Destiny was the showstopper tourney of the day on Spartan Poker. Logging in 623 entries, the INR 5,500 buy-in event accrued a guarantee-smashing INR 31.15 Lakhs prize pool. Racing past the competition was online regular Gaurav Sood aka ‘mozzie17’, who walked away with the title and booked his seat to the SnG Finale. Finishing runner-up to Sood was Anujkumar Kodam aka ‘aatmaan108’. Siddhanth Kripalani aka ‘sidstack’ followed next, Yowan Patel aka ‘PAPITO’ ended up in the 6th place.

Getting a crowd of 122 runners, the INR 4 Lakhs GTD Mega Freeze kicked off last night at 9:30 pm on Spartan Poker. The top 17 finishers received a payout of INR 6.2K as min-cash. The final table was packed with regs but racing ahead of them all was Dhinesh Kumar aka ‘kendralust’. The player defeated ‘5di5’ heads-up and pocketed the winner’s cheque. Sandeep Varma aka ‘effuno’ finished 3rd place, Rishi Gupta aka ‘BollywoodNight’ in 8th place.

The INR 5 Lakhs GTD PPL #34 6-Max SuperStack drew 287 runners yesterday on PokerBaazi. Triumphing the tournament was Yash Dutt aka ‘paranoid’ who claimed the top spot for INR 1.1 Lakh in first prize after beating Suresh Kolli aka ‘oil_trader’ who settled in the runner-up position for INR 77,500. After the bubble, the top 36 players secured INR 3,400 as min-cash.

Wednesday flagship tourney of PokerBaazi boasted INR 30 Lakhs GTD in PPL #36 The Pride and registered 563 entries. The heads-up play took place between two well-known regs Ashish Munot aka ‘OMG_spew’ and mystery player ‘grovahova’, the former eventually came out on top to win INR 5.67 Lakhs while the latter added INR 3.98 Lakhs to his bankroll. Neel Joshi aka ‘Worm33’ finished in the 3rd place for INR 2.56 Lakhs.

PokerBaazi’s INR 3 Lakhs GTD PPL #37 6-Max Holdem Boost enjoyed a smashing run last night. The tourney collected a guarantee-busting INR 3.57 Lakhs in prize pool on the back of a field of 357 entries. The top 45 places got paid. It was none other than PPL #29 The Endeavour winner Lakshpal Singh aka ‘boombtlt23’ who emerged triumphant after knocking out ‘rekop’ in heads-up to claim INR 74,970 in prize money. The latter bowed out with INR 52,480 for finishing second.

Another attraction on Adda52 was INR 2,750 buy-in AOPS Wheel assuring INR 20 Lakhs prize pool. Devvrat Arya aka ‘glitch_d’ picked up consecutive titles after already taking down Tuesday’s AOPS Cowboys. However, last night 755 entries joined the field and the top 82 walked out securing a min-cash. Arya railed out ‘mannu425’ in heads-up for INR 5 Lakhs prize money. The latter picked up INR 2.69 Lakhs for his efforts.

PokerStars India hosted Big Bubble Rush INR 5 Lakhs GTD last night. The INR 2,750 buy-in event drew 173 entries out of which the top 29 places got paid. It was Vaibhav Bhatia aka ‘vaibsss’ to come out on top after a two way deal that saw Harsh Dembla aka ‘kakori kabab’ in the second place. Bhatia shipped it for INR 45,900 in top prize while Dembla earned INR 48,846.