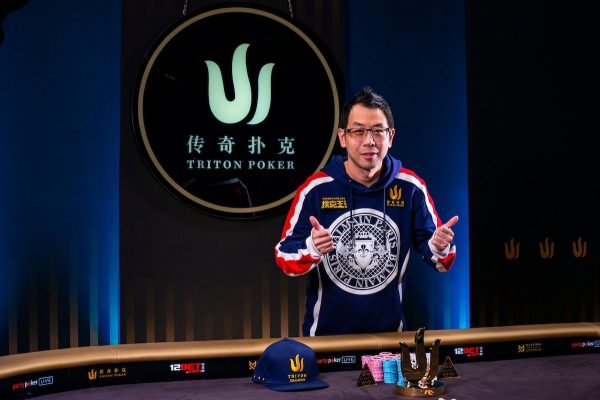 No major titles in his 15-year tournament poker career so far and just about $3.6 million in live cashes is what Hong Kong’s Winfred Yu’s poker CV looks like. It would make you wonder how someone like him managed to build a bankroll good enough to play the world’s largest stakes at the Triton Poker Montenegro SHR Series.

Well, he’s one of the biggest names in live cash games across Asia and now, he’s managed to capture his first high-stakes tournament title as well. What a stage to get it at too. He registered to Event #3 – Short Deck Ante Only, where he, along with all the 70 entries paid the buy-in of HKD 100,000 (~$12,750) to participate.

This was a 2-day event and the first short deck tournament of this series at the Maestral Resort, Budva. Montenegro, and Yu emerged champion to take away a pay-check of HKD 2.04 million (~$260k) after beating recent Super High Roller Bowl winner Isaac Haxton in heads-up.

Day 2 began yesterday with just 11 players left in contention and Leon Tsoukernik was quick to make a couple of eliminations to burst the money bubble. Tsoukernik, the owner of Kings Casino in Rozvadov, played well but eventually finished 4th in this tournament, before Yu took it down a few eliminations later.

Initially, Haxton had a lead of over 3:1 when he entered heads-up with Yu, but the latter managed to play fearlessly and clear the deficit before taking a lead of his own. It was back and forth doubling up before Yu finally cracked Haxton’s Kings with JQ after he rivered a third Jack. “I’m very excited. It’s my first Triton championship. Last year I came fourth in the short-deck main event, this time I got the job done,” he said after the victory.