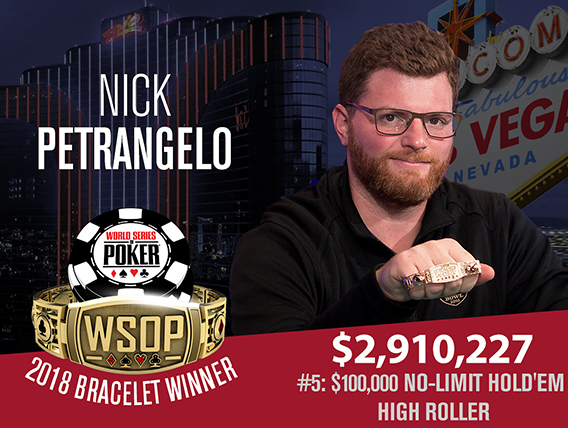 Nick Petrangelo is the latest bracelet winner at this year’s World Series of Poker and it sure was a big one. The US pro won the first big ticket event at this year’s WSOP for a massive $2.9. Event #5: $100,000 NL High Roller attracted 105 players to create a prizepool in excess of $10 million with the top 16 finishers getting a payday. Being a big buy-in event it was not surprising that the winner and the two runners-up scored more than a million dollars for their finishes.

Elio Fox has been on a real hot streak and was looking to make his third bracelet overall in this event. Fox is a former WSOP Europe Main Event champion and started his 2018 WSOP campaign smashingly by winning his second gold bracelet earlier last week. He was looking good to make it three but Nick Petrangelo had other ideas. Petrangelo won his second-career bracelet with this $100K win. His first bracelet came three years ago in WSOP 2015’s $3K NL Shootout.

It was a power packed final table featuring some of the brightest talents of poker from around the world. Not only that but these players have also been in terrific form so it was quite a mouth watering prospect for observers of the game to see such star power. Fedor Holz might say he is retired but boy we wish we could all retire the way this young German star is going about it. Yet ANOTHER High Roller final table for the German player but for once he was unable to go the distance finishing in ninth place. Red-hot Jason Koon went deep, but he couldn’t finish higher than seventh place. Stevie444 was dunzo in sixth place. Bryn Kenny had another strong showing but the New York pro bounced in fifth place.

Andreas Eiler and Aymon Hata were trying to become the second European to win a bracelet this summer, but they both were picked off in fourth place and third place respectively. When Hata busted, a heads-up bout was set between Elio Fox and Nick Petrangelo. Fox couldn’t pull off another win and had to settle on a second-place finish. Fox earned $1.7 for a consolation prize. He’s won nearly $2.2 million since the WSOP began. Petrangelo now has over $14.6 million in career tournament earnings. This was his biggest score to date. His previous high was a runner-up finish in the WPT Aplha8 High Roller in 2015 for a $1 million score.