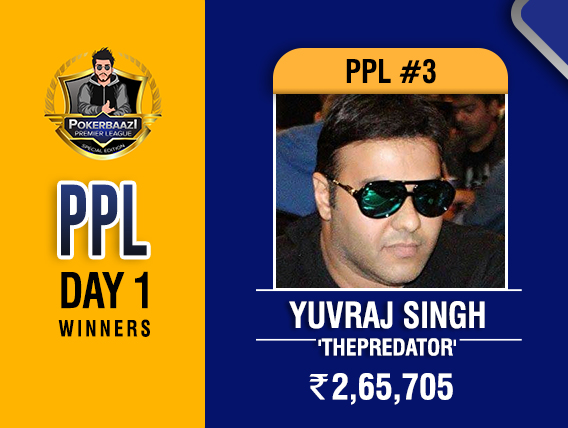 The PokerBaazi Premier League (PPL) is back again and as usual, there’s plenty to be won across the next 10 days of the series. PokerBaazi keeps pushing the limits and this time they’ve announced INR 7+ Crore in series guarantee, with several tournaments lined up between 20-29 September 2019. Here’s a complete summary of what happened on PPL Day 1…

There was INR 50+ Lakh on offer on PPL Day 1 itself and the series began on a smaller not, with an INR 5 Lakh GTD tournament. 309 unique players (plus re-buys and re-entries) registered to the first tournament of the day and the eventual winner turned out to be Aayush Kawar aka ‘aces55’ who took away INR 1,16,802 for this victory, making a brilliant start to the PPL series on PokerBaazi.

Second tournament of the day and a total of 396 entries were a part of the action including 186 re-entries. With many top names in contention, it was a tough fight which ended in poker pro Aman Kejriwal aka ‘alwaysriver’ emerging victorious. He was rewarded with the top prize of INR 63,000 for topping the field.

This was one of the bigger tournaments on PPL Day 1 and with a buy-in of INR 2,500, we witnessed a field of 547 entries. The tournament went on for 5+ hours and the last man standing was Yuvraj Singh aka ‘ThePredator’. Yuvraj is a known face in the poker industry, playing live and online both. Here, he outlasted the field and bagged a massive paycheque of INR 2,65,705 for topping the field. When we reached out to Singh, he said, “I’m happy to start the PPL with this sweet win.”

This tournament halted when we reached the final 21 players, all of them winning a package trip to play poker in Goa at the Baazi Poker Tour, which is making its comeback to the live stage after a few years. 210 players joined the competition and the top 21 received BPT packages and some of the known names to win this were Akshay Nasa aka ‘sherlock52’, Pranav Bang aka ‘pranav.bang1’, Sam Anand aka ‘thereallokimon’, Rubin Labroo aka ‘kornkid’, Nishant Sharma aka ‘Nishant177’, Akanksha Singh aka ‘Maciza’ and many others.

With a buy-in of INR 3,300, this was the final tournament of the day and the guarantee was smashed with 464 entries joining to create an INR 13+ Lakh prize pool. Again, there were many known names in the field but the player to go on and ship the tournament was Ragesh Mishra aka ‘ragesh91’ who was rewarded with the top prize of INR 2,79,792 for this effort. In heads-up, he beat ‘bisadip176’ who had to settle for the runner-up prize of INR 1.96 Lakh.

The 10-day long PPL poker series resumes today with Day 2 and you can get all major updates on the same on GutshotMagazine.com.