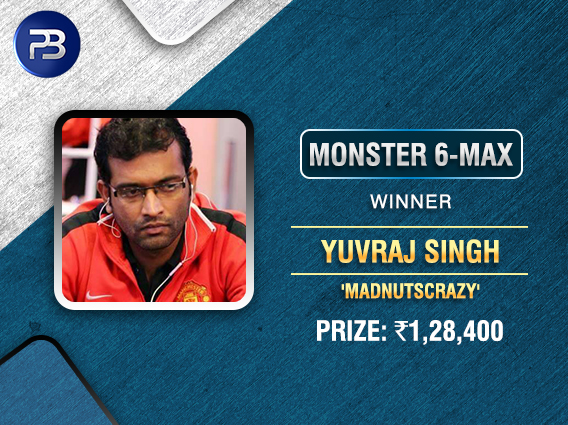 Most of the top poker companies reserve their best online tournaments for Sundays and other holidays. On PokerBaazi, there are several high-guarantee tournaments on Sunday, giving everyone the chance to be a part of the prize pools in these various tournaments.

One of their Sunday grind tournaments includes the Monster 6-Max INR 5 lakh GTD, which is played out every Sunday at 5pm, before the BSS (Baazi Super Sundays) kicks off later in the night. The tournament has a buy-in of INR 2,750 and yesterday, a total of 214 entries (103 players + 111 re-buys) registered.

This led to the guarantee being beaten and a new prize pool of INR 5.35 lakh being generated, which was ultimately shared among the top 17 places with a minimum cash prize of INR 10,700. Eventually, after 5 hours and 19 minutes of grinding, we had a winner of the Monster 6-Max tournament.

Yuvraj Singh aka ‘madnutscrazy’ took down the title after outlasting all the other entries on the night. Of course, it wasn’t an easy ride having to get past some really good players, but he managed the victory and was rewarded well for it – INR 1,28,400. It came to an end after he beat ‘borntrouble’ in heads-up, who won INR 90,950 for finishing second.

There were many other top players finishing in the money, including Neeraj Kumar aka ‘SelfClaimedPro’ who finished fourth and also took down the BSS PLO tournament later in the day. Akshay Nasa aka ‘sherlock52’ was also among the top finishes, busting in 12th while having a better day elsewhere, winning the Adda52 Millions for INR 6 lakh playing under the name ‘vibaks’.

As for Yuvraj Singh, this wasn’t his first major victory either. He has been around the online poker circuit since a few years now and we’re sure we’ll see him winning more in the time to come. Gutshot had a word with him after this win. He said, “PokerBaazi has some of the best structures for tournaments across sites. The tournament was amazing and I had the opportunity to play against some of the best players like Akshay Nasa, Neeraj Kumar, etc during this tournament.”

“In the final two, I was 1:6 underdog in chip counts. However, with some good luck, I managed to overcome the same. Thanks to PokerBaazi and team for such amazing tournaments. Looking forward to playing more and more there.” Keep reading GutshotMagazine.com for similar updates from the Indian poker industry.