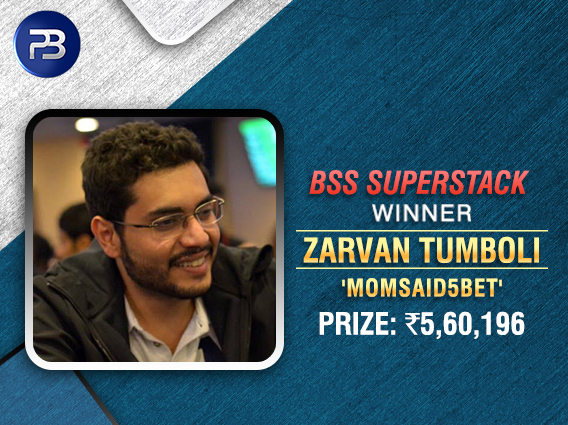 Every Sunday, every major poker website in India hosts some of their best offerings, given that the day is a work-off and hence many players have time to indulge in their poker passion. One such reputed company PokerBaazi hosted their ever-popular BSS SuperStack INR 25 Lakhs GTD yesterday. This is one of the company’s offerings that regularly gathers a healthy turn-out and that’s what happened last night too.

The tournament started at 7 pm sharp on the site and attracted a total of 648 entries (including 265 re-entries). The field consisted of the bests in the game, who all were looking to bag this coveted title yesterday. However, it was Zarvan Tumboli who denied the rest the title, himself bagging it for an awesome INR 5,60,196 first-place cash prize at 3.09 am today morning, when the tournament ended.

Tumboli defeated a tough field and a tougher Final Table on PokerBaazi to secure his victory. He beat ‘brointer’ in heads-up. The latter settled for INR 3,90,420 as runner-up cash prize. Tumboli is an acclaimed community player and among his live wins is winning the Ho Chi Minh Cup in Vietnam last September.

Tumboli’s online record is a monster, featuring multiple victories and top spots in various popular online tournaments. Just last month, he won 3 major titles just on Spartan, two SSS wins and the Flash win recently. He even nailed the SSS leaderboard and earned an extra INR 2,50,000 for that.

Keep reading GutshotMagazine.com for more such tournament roundups, updates and general poker news from around the world.