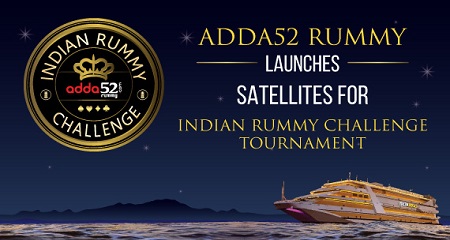 Recently, a very successful Live Rummy tournament was hosted by RummyCircle in Goa, called the Grand Rummy Championship. After weeks of online qualifiers, over 200 participants were flown down to Goa for the finale, to play a tournament with a record prize pool of INR 70 lakh. The tournament was won by Andhra Pradesh’s Mandava Subrahmanyeswara Rao.

After the success of that tournament, another online gaming operator has decided to launch a big rummy tournament. Adda52, more popularly known as a leading online poker operator in the country, also has a rummy brand called Adda52 Rummy and they have recently announced the 2018 Indian Rummy Challenge (IRC).

This magnificent event will once again be hosted in Goa, on board the Deltin Royale cruise-liner, and is scheduled to take place between 14-15 July 2018. A huge overall prize pool of INR 25 lakh has been set for this event while the first-place player will receive a whopping INR 10 lakh cash prize.

The previous IRC tournament was held back in December 2017 as a part of the World Gaming Festival (WGF) and that was a major success. Vikesh Divakaran finished first in the IRC 2017 Main Event and took home INR 10 lakh while Rajasekhara Reddy finished second and won INR 5 lakh.

The prize pool is not the only thing that will attract players to play in this tournament, but the opportunity to showcase their talent, as live rummy is played on a much smaller scale than live poker. Online qualifiers will take place daily on the Adda52 Rummy website, where winners will qualify to the Daily Qualifier tournaments. Winner of these qualifier tournaments will in turn win a ticket to play in the IRC Main Event live at Deltin Royale.

The package consists of the following:

For all updates on the 2018 Indian Rummy Challenge, keep reading GutshotMagazine.com.