In Deals Rummy, players are allocated chips at the beginning of the deal for pre-decided number of deals. One winner wins all the chips at the end of each deal. At the end of pre-decided number of deals, player with maximum number of chips is selected as the winner for the rummy game. Deals rummy is played between 2 to 6 players with two packs of 53 cards each. Joker cards are also used. 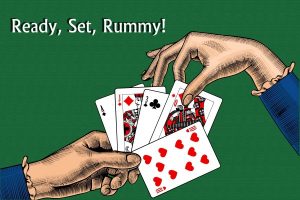 Each player is expected to arrange their cards into sets or sequences. The 13 cards are supposed to be picked up from either closed or open deck. A random toss decides which player is supposed to make the first move. The player with the highest face card gets to play the first turn. A player that has two sequences and who declares a valid hand wins the deal. When others lose players, the player who has been winning accumulates the maximum number of chips at the end of all deals wins the rummy game and thus the prize pool.

Each player starts the game with 480 Points. He would move into the second deal with 680 Points. At the same time, the other players’ will go in to the next round losing these chips. Player with the maximum number of chips at the end of 6-deals will win the game. The player who gets more than 80 points loses the game. In 6 players table, the player who has the minimum points after the fixed number of deals wins all the money. At the end of the pre-decided number of deals, players will be assigned ranks in the order of their chip count.

To know more about the game, keep reading GutshotMagazine.com