Want to learn how to play rummy ? Here you go!

Rummy is a card game that was originated from a Chinese game called Khanhoo. The objective is to make the best combinations of cards in the form of Sets or Sequences. Traditionally, Rummy is played with two decks of cards, for two players, a deck of 52 cards with two jokers is required. The standard rummy and Indian rummy only differ by the number of cards given to each player.

Jack, Queen, King are all known as a face cards. A valid game show, consists of displaying the cards in a sequence, thrice. A valid game will only happen when three Rummy shows have taken place:

The basic goal in any rummy game is to make melds, consisting of sets, three or four of a kind of the same rank or suit. A player is considered as the winner when they declare first and meld (arrange) cards correctly making the first valid show. All the other players also have to submit their cards and display the groups that they have made. A players score is calculated on the basis of the group of cards that they have made. Cards like Jack, Queen, and Ace bear 10 points each. If your’re unsure about certain Rummy terms, don’t worry! We’ve got you covered.

What is a Joker card?

After the distribution of 13 or lesser cards to each player, one random card is taken from the remaining deck of cards and placed face-up as a joker card.

What does Draw and Discard mean?

In Rummy, each player is given a hand of cards. Additionally, the remaining cards are stacked up from which each player can draw a card. Once a player draws a card, he has to get rid of one card, this is called discarding. 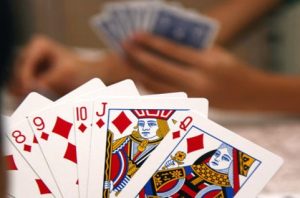 What does Meld mean?

Each player is provided with 13 cards. The objective is to arrange these cards into 4 groups of 3, 3, 3 and 4 cards. These groups can be either called a Life or Set. Once the player has made groups, they has to show the cards for validation of the players. Arranging the cards in groups is called Meld or Melding.

Indian Rummy has evolved into the digital sphere lately. Rummy websites are gaining alot of attention as compared to other gaming portals. The Supreme Court of India has declared that Rummy is a game of skill and has made it legal in the country. It is now considered that playing rummy requires alot of thinking in order to form different sequences and sets. Rummy involves using mathematical skills which are proven to be effective in keeping the mind active always!

To learn more about the game Rummy and its terms, keep reading GutshotMagazine.com