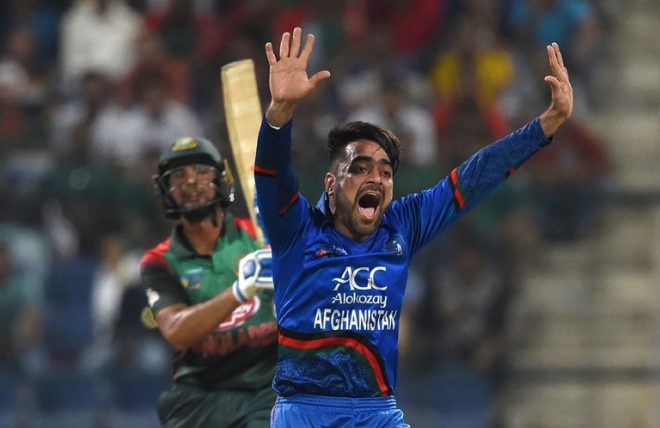 Afghanistan faced off Bangladesh in the duo’s final match of the group stage with both having won their previous game against Sri Lanka to knock them out of the tournament. The Afghanistan team seem like they are in top form in this year’s Asia Cup and they continued it against Bangladesh as well. Having won the toss and electing to bat, Afghanistan lost two early wickets at the hands of Abu Hider. Hider, making his debut in the match, picked two quick wickets to put his opponents in a tough spot with the scorecard reading 28/2 at the end of the 6th over.

Mohammad Shahzad and Hashmatullah Shahidi kept their calm after losing two wickets and stabilized Afghanistan’s situation, and shared a good partnership before the former fell prey to Shakib Al Hasan in the 20th over. Shakib struck again in the 26th over and Afghanistan kept losing wickets in regular intervals and it looked like the target would be around 200. But Rashid Khan had something else in mind as he came out to bat along Gulbadin Naib and duo racked up a cracking partnership of 95 runs in just 55 deliveries passing the expected total by a margin and getting a total of 255/7 at the end of the innings. Rashid Khan scored a quick half century while Naib missed his by 8 runs but this 95-run stand for the 8th wicket is the highest the world has ever seen in this format of the game – HIGHEST EVER!

Bangladesh came out to bat and lost two wickets in quick succession, just like Afghanistan. Shakib, after picking up four wickets with the ball, tried hard to balance out their innings with a composed performance with the bat but to his disappointment as he had almost no support from the non-striker’s end as Mominul Haque and Mohammad Mithun lost their wickets quickly too. Shakib, after Bangladesh lost two more wickets of Haque and Mithun, finally got a little something in return from the other end in Mahmudullah.

The duo tried to dodge out the relentless bowling prowess of Afghanistan but in vain as the Shakib fell prey to an outstanding delivery by Rashid. Mosaddek Hossain, who remained not out till the end, came out to bat but it’s just did not click for Bangladesh after losing crucial wickets and important stages of the game and Mahmudullah lost his wicket too at the hands of Rashid and this was the final nail in the coffin as there was no coming back for Bangladesh and they lost the match by 136 runs  making it their 4th biggest victory in terms of runs in the limited over format. Man of the Match: Rashid Khan.

Here is the statistical analysis of the match along with some of the records broken:

Keep reading GutshotMagazine.com for daily updates on the 2018 Asia Cup.