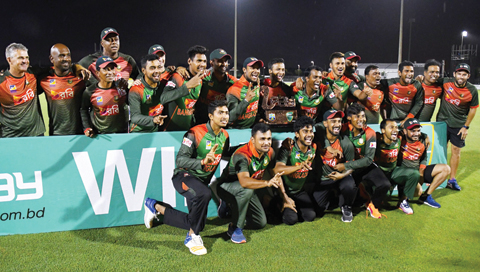 Bangladesh, a team that until very recently was considered as one of the minnows or ICC associate-member nations, has beaten West Indies in their own backyard, in a recently concluded series of 3 T20Is. And yes, West Indies are also world champions in this format of the game.

Bangladesh started their tour of the Caribbean on a very pathetic note, losing both tests very badly and knowing that the Windies are better in the shorter formats, one would’ve expected their tour to only get worse from that point onwards. However, Bangladesh ended up winning the ODI series as well as the T20 series, along with everyone’s hearts.

They lost the opening T20 and needed to win two successive game to claim the series. They managed a victory in the 2nd T20 and then elected to bat first in the series decider. Young Liton Das stepped up at the right time, scoring his first T20I fifty and a career-best score of 61(32), which was instrumental in getting the team up to a very competitive 184/5.

When defending high scores, you hope for early wickets and that’s exactly what Bangladesh got, reducing Windies to 32/3 early on. The wickets kept falling through the innings and it was too much of an ask for the home team in the last few overs. The only one who got away was ‘Dre Russ’ Andre Russell, scoring 47(21), as wickets fell around him.

Mustafizur Rahman was slightly expensive but he got vital wickets at right times, finishing with 3/31. Shakib al Hasan bowled another brilliant spell of 1/22, winning the Player of the Series award. The heavens then opened up in the 18th over, and Windies were 19 runs behind the D/L par score, as Bangladesh completed a historic 2-1 series victory. Man of the Match: Liton Das.