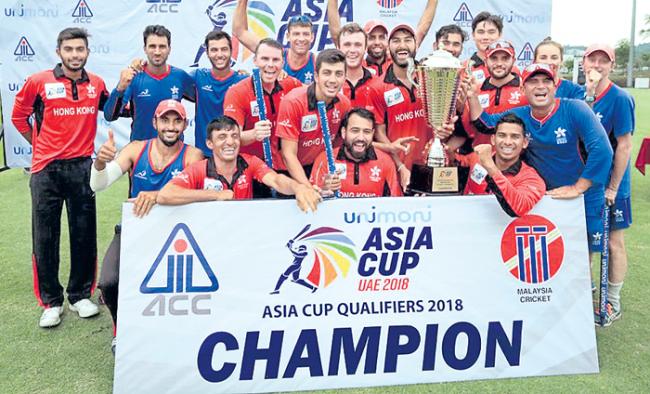 The last one week has been packed with Asian cricketing action, as the Asian associate members battled among themselves for a spot in the 2018 Asia Cup main tournament. These Asia Cup qualifiers took place between 29 August and 6 September, with six countries vying for the tournament win as only one would qualify for the main tournament.

It was a thrilling tournament with plenty of tight finishes, but they decided to save the best for last as Hong Kong and UAE faced off in a nail-biting encounter yesterday. The tournament took place in Kuala Lumpur and the final was a rain-hit game, which saw UAE getting to bat our only 24 overs after being put in to bat first.

79(51) from Ashfaq Ahmed was one of the highlights of that innings as UAE put up a decent score of 176/9, recovering well after the rain interruption. They didn’t look like they would cross 130-140 when they lost early wickets, with Aizaz Khan bowling a fantastic spell of 5/28, which ultimately won him the Man of the Match award.

Hong Kong wanted a shorter game and that’s what they got, going out there and smashing the ball around the park to get off to a quick start. They lost a couple of wickets later, but they were able to take the game deep, eventually winning by 2 wickets in the final over. What a game of cricket. They have qualified and will play in the same group as India and Pakistan.

Gutshot had a word with Hong Kong pacer Tanwir Afzal after this historic win, to find out how the players were feeling. He said, “There were a few ups and downs, but we won and now we’re pretty excited to play at the Asia Cup, which is a big stage for us. We’re a young group and we’re all excited. We’re enjoying, and we hope to enjoy tonight’s celebrations as well.”  Keep reading GutshotMagazine.com for major sporting updates.