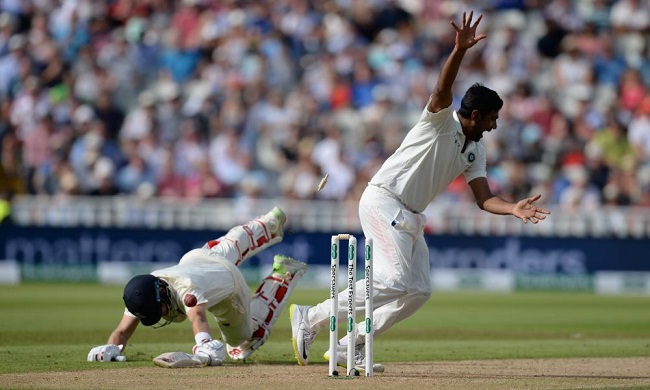 India off to a good start in 1st Test

India embarked on a long tour of UK towards the end of June and they’ve completed the T20 and ODI series against England, after a couple of games against Ireland. India did well to win the T20 series 2-1, but England proved that they are one of the best in the 50-over format, winning 2-1.

The test series was set to be India’s biggest challenge on this tour so far, after a miserable performance back in 2014 when they last toured England. The hosts won the toss in the 1st Test yesterday and elected to bat first, with India making the brave decision of dropping Cheteshwar Pujara and going in with just one spinner, Ravi Ashwin.

Ashwin was brought in by the 7th over and that was another brave decision by captain Kohli in such good conditions for the new ball bowlers. However, Ashwin struck immediately, dismissing his bunny Alastair Cook for 13. What followed was a long couple of sessions for the Indians in the field.

Joe Root continued his sublime form against India and he improved on his brilliant record of fifties in all 12 test matches he has played against India. The next best was Australia’s Doug Walters who scored 9 consecutive fifties against West Indies a few decades ago.

However, Root was dismissed for 80, due to some brilliance in the field by Kohli, who tumbled, rolled, threw and hit the stumps directly as Root was miles short. He replicated Root’s ODI ‘bat-drop’ celebration with some swearing and a ‘mic-drop’ celebration which was one of the highlights of Day 1 of the test match.

Following Root was Jonny Bairstow, who played well for his 70(88) before England collapsed badly from 216/3 to 283/9 as India came right back into the game in the final session. They missed a chance to wrap up the England innings as Dinesh Karthik dropped a catch on the penultimate ball of the day, but overall, it was a good day for the Indians. At Day 1 Stumps, England were 285/9.

When play resumes on Day 2, there’s a chance that the duo of Karthik and Murali Vijay have a bat together. These two were already involved in a couple of funny situations on the field yesterday. They made headlines for having made the playing 11 together and it’ll be interesting to see if these two can put their past behind them and carry on.

Keep reading GutshotMagazine.com for a daily update of the 1st Test Match between India and England.