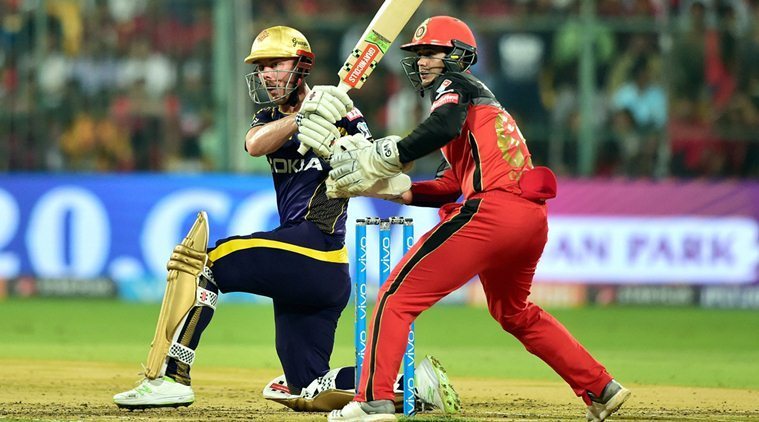 Yesterday’s IPL 2018 Super Sunday saw quite a few goof ups in the field. In the first game, Rajasthan Royals dropped a few catches, including that of Kane Williamson in 1st slip, by Rahul Tripathi. Williamson went on to make them pay, by scoring 63 and winning his team the match.

The age-old cricket saying ‘Catches win Matches’ proved 100% true yesterday, as Royal Challengers Bangalore dropped a few as well, before going on to lose their game against Kolkata Knight Riders in the final over. While Bangalore fared well with the bat, their performance in the field was horrible, for which they deserved to lose the game.

Kolkata won the toss and elected to field first at the Chinnaswamy and they maintained the same team. However, Kohli continued his trend of chopping and changing his team in every game, by announcing four changes. The biggest blow was that of the in-form AB de Villiers having to sit out due to illness.

In spite of that, RCB began pretty well, with McCullum and Quinton de Kock getting the side off to a slow and steady start and giving RCB a 50-run opening stand after what felt like ages. However, birthday boy Andre Russell came in and struck immediately, as RCB fell from 67/0 to 75/3. Once again, captain Kohli led the recovery and dealt some heavy blows towards the end. RCB managed to rack up 66 runs in the final 5 and end with 175/4. Russell enjoyed figures of 3/31 while Kohli ended with 68(44)*.

RCB were slightly ahead but Murugan Ashwin dropping Chris Lynn on 7 didn’t help their chances. Ashwin picked up 2 wickets but it wasn’t going to cover up for his earlier crime, as Lynn played the anchor innings of 62(52)* that helped KKR get over the line with 6 wickets and 5 balls to spare.

Once again, RCB’s bowling came under scrutiny as they failed to defend 175 on a slower Chinnaswamy pitch. To be honest, there’s only a certain amount one or two people can do for a team. Kohli scored his third fifty today and then took a blinder in the field (click here to view), but he can’t win matches if his team isn’t helping him out. Man of the Match: Chris Lynn.

Just 2 wins in 7 games and it doesn’t look like RCB have a very bright future in IPL 2018. Keep watching GutshotMagazine.com for daily IPL updates and cricket match results!