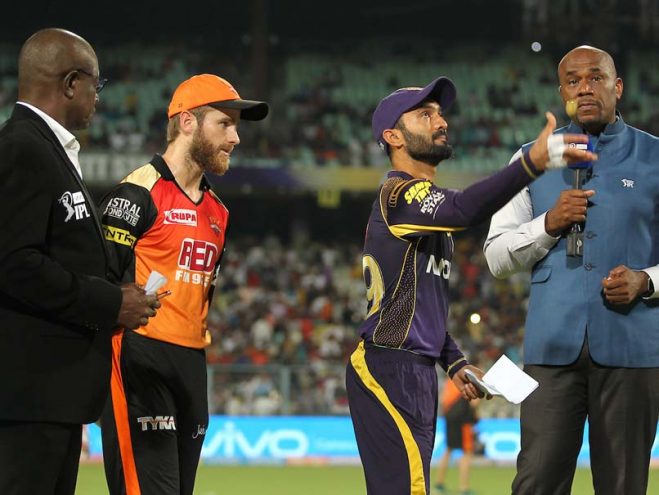 Chennai Super Kings completed a fantastic last over victory against Sunrisers Hyderabad in Qualifier 1, thereby booking their spot in the IPL 2018 final. Sunrisers were still not out of it, getting another chance in Qualifier 2, against Kolkata Knight Riders. Kolkata beat Rajasthan Royals by 25 runs in the Eliminator to get here, and we’re in for some thrilling cricket in this virtual semi-final match.

Qualifier 2 is scheduled to be played at 7 pm IST tomorrow, at the Eden Gardens in Kolkata. These two teams beat each other once each during the round robin stage and while Sunrisers topped the IPL 2018 points table, Kolkata endured a tough last few games to make the playoffs.

The game is being played on the same spin-friendly pitch, where Kolkata were able to defend 169 with ease in the Eliminator. We now know, with quality spinners in both sides, that anything above 150-160 could very well prove to be enough here. However, both teams have areas to work on before this vital match-up.

Sunrisers have a brilliant bowling attack with the likes of Siddarth Kaul, Rashid Khan and Bhuvneshwar Kumar, but their batting has been very inconsistent. Apart from Shikhar Dhawan and Kane Williamson, none have stepped up this season and if these two get out early, the team tends to lose. They have the option of bringing in an extra batsman in Alex Hales, but after Brathwaite’s 43* in the last game, he may keep his place.

Kolkata too must work on their batting. Sunil Narine is a ‘hit out or get out’ option at the top, and while they have able finishers in DK and Andre Russell, their middle order has been consistently failing. 3,8,15,31,21,11,21,7,3 have been Nitish Rana’s scores in his last 9 innings after a good start to the season while Robin Uthappa has been misfiring more often than he should be in IPL 2018.

We’re expecting a thriller of a game in Qualifier 2 and the winner of this game will go straight into the IPL 2018 final, where Chennai Super Kings are waiting. Keep reading GutshotMagazine.com for more cricket updates and IPL match results.