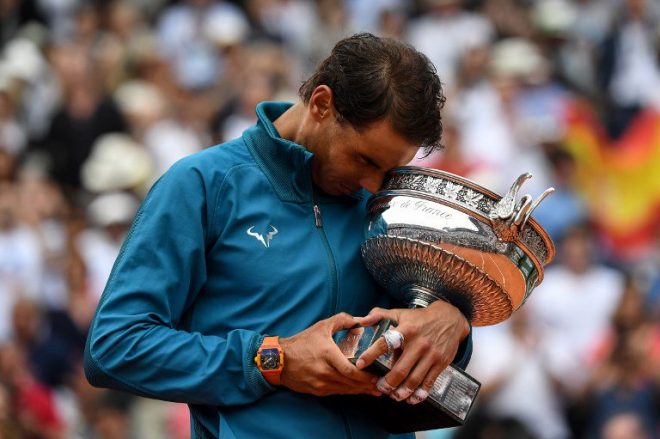 A day after Romania’s Simona Halep beat Sloane Stephens and won the women’s final of the 2018 French Open, the men’s final took place at the Philippe Chatrier Court. World number one Rafael Nadal, also known as the ‘King of Clay’ took on Austria’s Dominic Thiem, seeded #7 in this tournament.

Between 2005 and 2014, Nadal won 9 of 10 Roland Garros titles and that’s when he gained the reputation of being unbeatable on clay. Injuries and aging may have slowed him down in between, but Nadal is proving that he is still fit to be called the best in the world, thrashing his opponent in straight sets, defending last year’s victory and winning his 11th French Open title.

“It’s a dream to win 11 times. It was important to play the way I did. It was a tough moment when I got cramp. He (Thiem) is a player who pushes you to the limit,” said Nadal after beating the 24-year old Thiem 6-4,6-3,6-2, even though he suffered from cramps during the game.

Nadal is now only the second player in the history of the game to have won 11 grand slam titles on the same surface, after Margaret Court, who won 11 Australian Open titles in her career. This is his 17th overall grand slam victory and is now only three away from Roger Federer’s record tally of 20 slams.

While he did face defeat, Thiem is one to watch out for in the future. He reached the semi-final in the last two editions of the French Open and this was his first ever Grand Slam final. He was flattened by Nadal but Thiem has a lot to learn and could probably be a future world number one as well.

The next major tennis tournament is the Wimbledon Championships which will kick off next month and GutshotMagazine.com will bring you daily updates from that tournament as well, so stay tuned.